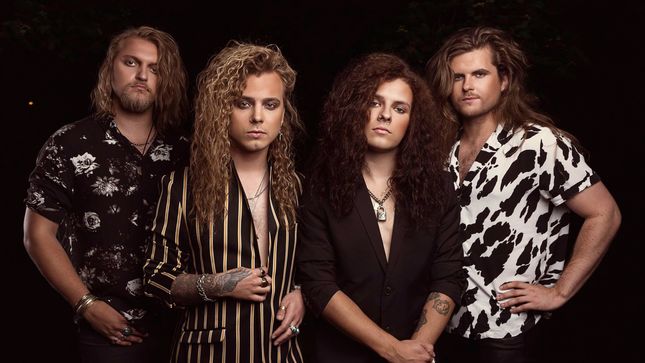 Frontiers Music Srl announces the signing of hard rockers, Bloody Heels, as the band joins the label's rapidly expanding pool of young talent. With a musical style that could be best described as a sort of missing link between CrashDïet and Crazy Lixx, the band is preparing their label debut for release in 2020.

‘’As to the music itself and the songs, this time we wanted to write without overthinking or putting ourselves in a “box". We experimented a lot and all the listeners will definitely feel and hear that. There will be some pretty heavy songs on the new album, but at the same time there’s plenty of melodic stuff, harmonies and big choruses. I like to call this album ‘Dark AOR’, haha! We managed to blend everything we love about music, to be honest. But one thing is for sure, we’ve never felt such a strong connection with the songs before and we can’t be happier that this album will be released internationally via Frontiers, one of the leading rock labels in the world right now! It’s an honor to be working with them,” says singer Vicky White.

Formed in 2012 in Riga, Latvia by Vicky White, Harry Rivers, Gus Hawk, and Chris Flint, the band debuted their first recording in 2014 with the Summer Nights EP. The "Hungry For Your Love" single and music video was released at the same time and proved a nice introduction of the band to sleazy hard rock fans around the globe. The band then independently released their debut full length, Through Mystery, in 2017 and started to tour relentlessly in Scandinavia and East Europe.

In 2018, work for their sophomore album begun, but one of the founding members, Chris Flint decided to leave the band. Shortly after, new member Gunn Everett took over the bass duties.

"That was definitely a really interesting period in the band. First of all the departure of the founding member Chris Flint and the arrival of Gunn Everett. We definitely had a few rough months, but we knew right from the start that Gunn was the right dude for the job. And he is...," says White.