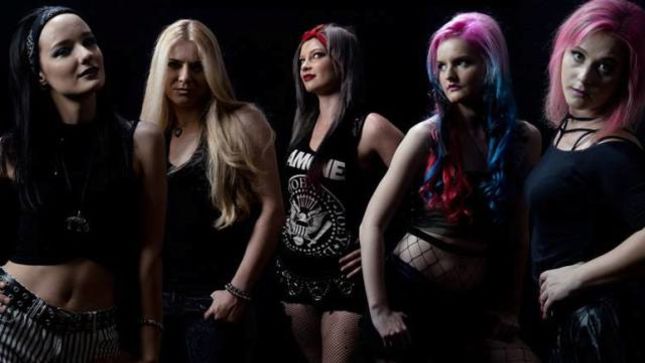 Anna Monteith, drummer for New Zealand punk band Blue Ruin, is featured in a new interview with Entertaim.net discussing the band's debut EP, Green River Killer. Following is an excerpt from the chat.

Entertaim.net: You also covered "Turn On The Night" by KISS. Why KISS for a punk inspired band?

Anna: "Ahh yes, well we love the idea that any band can make their own version of any genre. 'Turn On The Night' is my favourite KISS track and I always wanted to do a more punk style cover of it. So why the hell not, you know? Once Bruce Kulick was keen to feature on our version – it was a definite must! And he did a wonderful job. I think we accomplished the goal there."

Entertaim.net: How was the feedback on your EP so far?

Anna: "The feedback has been awesome! It is really nice to see so much support in all these new places. We have had some great reviews online and people really dig our kind of Misfits meets Green Day vibe. Of course you get those people that say we sound like this girl band and that girl band, but they obviously haven't listened to us if that is their opinion. People tend to put this label on female bands because they are female. Saying we sound like The Runaways is like saying Metallica sounds like Blink-182, if you know what I mean. We played some amazing shows in New Zealand and did really well, but Europe is a totally different ball game and we can't wait to meet all our new fans!"

Blue Ruin have announced a string of headline tour dates for March 2019 in support of their official debut album, Green River Thriller. Dates are as follows:

For information on the band go to their official Facebook page here.