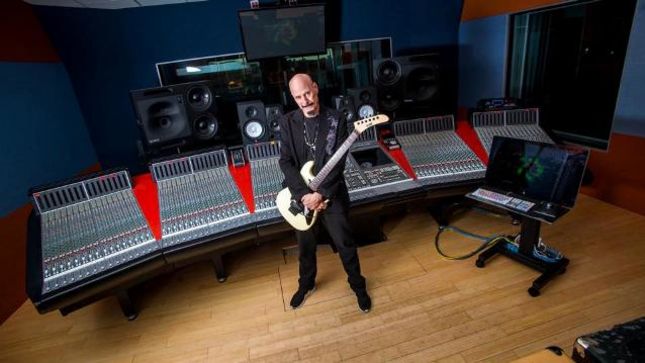 Initially dismissed by some as the work of a Facebook hacker, songwriter / guitarist producer Bob Kulick - best known for his work with KISS - posted a message online signalling a major falling out with brother / former KISS guitarist Bruce Kulick, as well as Paul Stanley and Gene Simmons, and associate Keith Leroux.

Jimmy Kay from Canada's The Metal Voice contacted Bob Kulick, who confirmed the post was his doing and opened up about the situation.

Bob Kulick: "After a successful KISS Kruise the year before, my brother was totally intimidated by the fact that as I said to him, 'Finally Bruce, it's taken all this time we finally found our band. Here's the band to conquer the world with.' The band that I put together Brent Fitz and Todd Kerns. My brother was shaking in his shoes when I said to him 'We're gonna have to ask Paul and Gene to pay for other people to come and play with us.' Yeah I said 'We're stars, you're a star Bruce, act like it...' but he has no balls at all so I had to go and set that up, so that Paul and Gene would have to pay two other performers to come and be our band. Then we were listed as Kiss Konfidential down there with the people who were on the panel; nothing, wrong with that."

"We did do a panel, but we also played. Nobody knew what we were gonna play. They didn't even have us listed as performers. They mentioned the other performers but not us; how insulting. The Kulick Brothers, no rehearsal, no soundcheck, the guinea pigs, the first band to play on the cruise with electric instruments. KISS only played acoustically, big difference. So there's everybody crowded in the whole ship, like the Titanic, it was kind of tipping over from everybody standing there. What did we do? We mopped the floor with KISS. Mopped the floor with them playing their own songs, totally kicked ass. I looked to my brother and said 'This is magic.' I then got tours booked for this band, offers, I had record deals ready to go even if it was only to play the songs we played on the cruise. Bruce turned all of it all down, costing me work and wasting my time."

"He basically did what I would have done; 'Show me first. If this is real, show me,' so I was just like, okay. A representative from Europe called and wanted to have a meeting with Bruce and his wife, and Bruce was just like 'Good luck helping Bob; I really can't be involved because I have my Grand Funk gig.' Which they only do select dates, and it would have been possible, just like he was able to arrange the time to be able to do the cruise without it being any conflict of interest with his main gig Grand Funk Railroad. I would have thought he could have squeezed the Kulick Brothers Band,  an exceptional band featuring two brothers who even though they may not even like each other, play unbelievable together. Why? I taught him how to play, he's got the same influences that I do, his brain works like mine does, we're from the same parents, so we both share the same gift as guitar players, so who could play better with me than him? Nobody."

History was made in 2017 in the world of KISS, when Bob and Bruce Kulick joined the KISS Kruise for the first time in the event's seven years the getaway had taken place.

"Our appearance on Kiss Kruise 7 the first night on the Main Deck (“Sail Away “ Stage) was one of our most exciting and memorable gigs in my life," says Bob.  "And I know my brother feels the same way about it!"

Just hours after the performance, the internet lit up when Kruise passengers began posting and sharing live video of the Kulick Brothers' show, which overwhelmingly was regarded as the strongest of the week.

The band (also comprised of vocalist / bassist Todd Kerns and drummer Brent Fitz) had one rehearsal and one chance to put a set list together for the show.  "It was a very personal walk down memory lane," Bob states. "Especially with these songs, since we played on the original recorded versions of every one of them."

"It was, of course, also a treat to play with Brent Fitz, who was our anchor for the show as well as bassist and vocalist Todd Kerns, who happens to be the singer on my single, "Rich Man," which just went to radio this week."

“Who Wants To Be Lonely”: