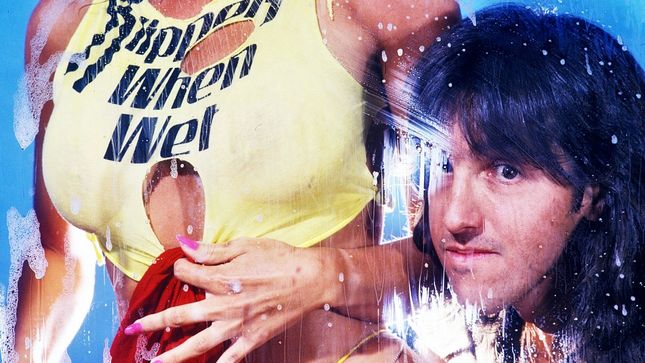 On June 2nd, Insight Editions will publish The Decade That Rocked: The Photography Of Mark "Weissguy" Weiss. This 378 page (including three 6-page gatefolds) hardcover book measures 9.2 x 12.8 inches and weighs 5 pounds. Written by Richard Bienstock, The Decade That Rocked includes a foreword by Rob Halford of Judas Priest, an afterword by radio and tv personality Eddie Trunk, as well as contributions by Daniel Siwek.

Bon Jovi's Slippery When Wet album cover took three shoots with three very different themes before it was approved. Mark Weiss was the photographer for all three. In a new interview with Greg Prato for Songfacts, Weiss shares some snaps from the shoots and explains how it went down. An excerpt follows:

"We knew we were getting close," remembers Weiss. "They needed a stronger image, so another photo was taken of a single lady wearing a cut-up shirt doused in water with the album title on it."

(The title) "Wanted" was out, sexy car wash lady was in, and the album was re-titled Slippery When Wet. (The band came up with the name after visiting a Vancouver strip club called No. 5 Orange, where a shower was part of the show. They were in the city to record with producer Bruce Fairbairn, whose studio was there. Jon Bon Jovi says they spent a lot of time in the adult establishments, which he called "cutting edge.")

The photo shoot took place on Bradley Beach in New Jersey, with the band members bringing along their cars and their girls, who were outfitted in "Slippery When Wet" T-shirts. The cover girl is Angela Chidnese, who later appeared in the pay-per-view Bikini Open 4.

It looked like Bon Jovi had their cover, but at the last minute, their record label got cold feet when some retail chains warned they would not stock the album due to its suggestive cover image. They needed a new cover - quickly. Jon Bon Jovi had an idea.

"I got a call from Jon saying, 'I'm coming over to your studio, and we're going to do a new cover. Just have a black plastic bag there for me," Mark Weiss explained. "He walks in the door, and says, 'Hang up the bag, throw some water on it.' I sprayed some water on it so you saw droplets on the bag, and he just wrote 'SLIPPERY WHEN WET.' And he walked out! He didn't even stick around for the Polaroid. I sent it in, and that was it."

Angela's cover made it to some international releases of Slippery When Wet, and this photo from the Bradley Beach shoot was used on the back cover. 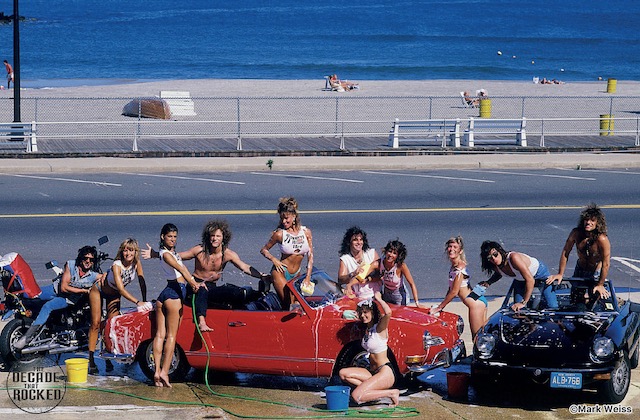 Send in your pre-order receipt to TheDecadeThatRocked.com and receive a 8" x 11" photo of the cover of The Decade That Rocked signed by photographer Mark Weiss valued at $200. Just pay for shipping and handling.

Jeff Keith and Frank Hannon of Tesla, Roxy Petrucci and Share Ross of Vixen, as well as Dana Strum and Mark Slaughter of Slaughter have filmed video testimonials, detailing how integral photographer Mark "Weissguy" Weiss was to the scene.