BOURBON CROW - All Three Albums To Be Issued On Vinyl With New Artwork, Pre-Orders Available 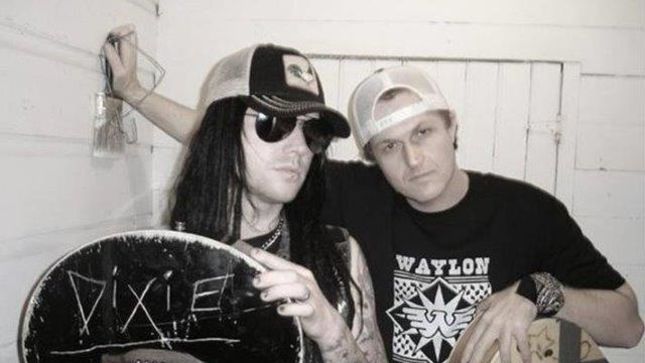 Bourbon Crow - the outlaw country project comprised of Rayen Belchere and Wednesday 13 - are issuing their three studio albums on vinyl, complete with all new artwork.

"Only one more week to add your last vinyl. Get 1 or all 3 with pre-order perks! The perks will not be shown, but here’s the first reveal of the limited edition new covers designed by Brett Williams you all will get! Don’t miss out! Pre-orders stop in less than a week or when supplies run out!" Visit bourboncrow.bigcartel.com to secure your copies.

"This reissue of the trilogy is a celebration of BC and the wonderful fans we affectionally call The Mules," says Rayen. "They wanted the vinyl so we listened. But for anyone curious, the band is on the shelf for a while as W13 and I both promote new solo records. Although there isn't anything new coming in the near future, we thought this was a cool way to celebrate and reinvent the first three records. The perks that The Mules who pre-order are going to get are awesome. This is our version of the way records used to come with cool stuff; like KISS."

Highway To Hangovers (originally released in 2006)

Long Way To The Bottom (originally released in 2009)

Off The Wagon On The Rocks (originally released in 2015)