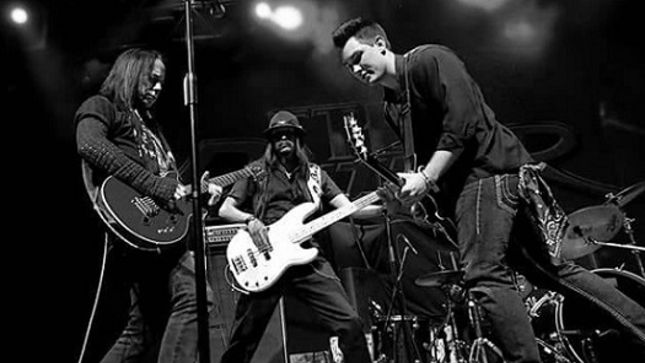 The Saints Of Las Vegas began to take shape two years ago in 2016. “I quit the Sin City Sinners; it was my own band, I quit it. It was poorly managed, and I let the manager have too much control,” explains Muscat. “It got to a point where it was turning into something that was not what I planned. You know it’s bad when you have to quit your own band. I wanted to distance myself from the manager and the bad vibes – quickly. It was like a sinking ship. It was just time to jump off.”

And thus, The Saints Of Las Vegas were born. “I found this really young guy, Anthony Serrano. I saw him playing guitar and singing at Vamp’d (in Vegas) one night; he was my discovery. He’s got perfect pitch, he plays guitar really well – and he’s good looking. He’s young and he’s got a lot of potential! We got rid of our original bass player, he was like a fat Nikki Sixx-looking guy. This year’s our year; we’re really cleaning up and tightening up. Brandon Garcia’s the new guy; he jammed with Prince during his Vegas residency. He’s really cool… it’s like if Johnny Depp and Carlos Santana had a love child.”

Initially, The Saints Of Las Vegas started doing cover songs, but all kinds of covers, not just rock n’ roll. “One of our first gigs, we got hired to play the Johnny Cash Museum in Nashville. Alright, we’re doing some country in our set. We also do ‘90s grunge, ‘80s sleaze rock, Southern rock, and pop. I would consider our new single ‘Tomeka’ rock / pop. If you took away the vocals, you’d hear Faster Pussycat; that kind of glam influence. If you listen to the music, that’s definitely a Brent Muscat song.”

In fact, the song “Tomeka” has been around since the early ‘90s and was intended for Faster Pussycat; yet the original band never recorded a fourth album. “Exactly. I had it written and when the band broke up, I kept the song. I had the music first, and when the band split I wrote the lyrics.” Brent penned the song about a girl he had a crush on, whose name didn’t fit into the wording. Simple solution, he replaced her name with his pet iguana’s name – Tomeka. “Exactly. Funny, right? Tomeka is like, where does that name come from? It sounds cool… Tomeka sings better. It’s about a girl I had a crush on who was kind of mysterious. I was talking about being over in a foreign land with a foreign girl, that I really didn’t know anything about; but I’m in love. Admiring her and trying to figure out what she’s about. It’s a pretty cool story. I was really young and she was young; we weren’t old enough for marriage at the time.”

The Internet’s reach is global, do you think the girl we’re talking about has heard “Tomeka”? “I doubt it. I was going to reach out to her and say, ‘Hey, I wrote this song.’ It wasn’t totally about her, but it was inspired by her. One of the last shows I did in Japan with Faster Pussycat, I think it was around ’94… I met this girl, she was a DJ, she was smart, she went to the best college there, she spoke three different languages, I was super impressed! She was half Chinese, half Japanese – and she was a model too! We were in her radio station and all the guys in my band smoked, so they went out to smoke, and I was just hanging out with her. It was like, what are you doing tonight? ‘Nothing, let’s hang out.’ I had a show, so she came with me and we hung out. We dated for a while but… the culture difference and things like that, it didn’t end up working out. It was a major crush!” 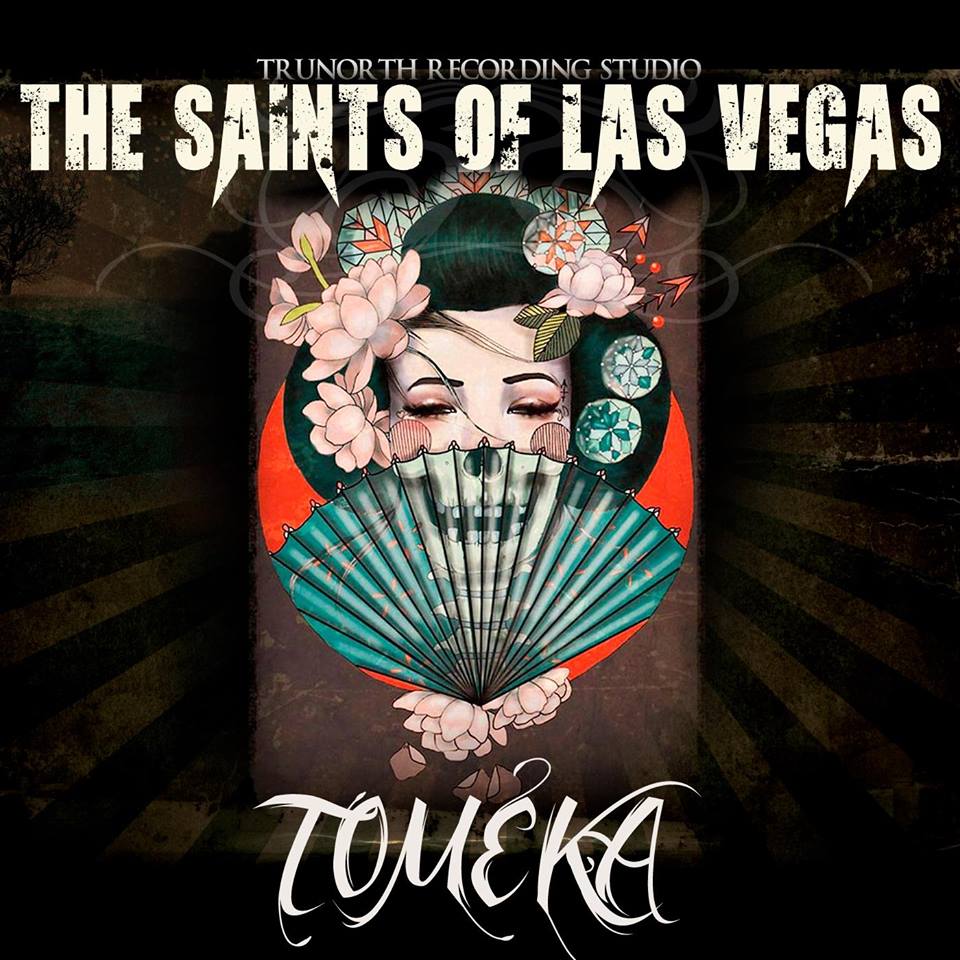 “Tomeka” is now available digitally on iTunes, Amazon, CD Baby, and Spotify. “Yeah, almost everywhere you can go. I’m learning about it now, which is fun. Cause before, the record company put it out, and now I’m doing it myself. We recorded with Ryan Whyte Maloney who was a contestant on The Voice (season six, Team Blake) and got really far; a lot of people thought he should have won. He’s from Traverse City, Michigan. He’s going to be joining forces with our band this summer. Our plan is to have a CD, a bunch of shirts, and we’re going to go west coast to east coast, and then back again in two or three weeks. I haven’t done that for a while and I thought, let’s try it with this band. We’ve been doing covers, and we’ve got original songs."

"That’s how Sin City Sinners – my previous band – started, with covers. Then we snuk in Todd Kerns songs one at a time. We were the first band… if I can brag a little bit. I was one of the first rock guys that moved out to Vegas and helped create a rock scene. We were one of the first bands to actually play originals in casinos. We had a crowd, and through the various projects I’ve been involved with, I’m proud to say that I’ve raised over $1 million for local charities.”

“My goal this year is to be bigger and better and give back. I’ve got a radio show called Mondays With The Muscat. You can tune in to RadioVegas.rocks or download a Tune In App. It’s a two-hour show on Mondays from 11pm to 1am Vegas time; if you’re a night owl and you can’t sleep, it’s pretty cool. And it’s replayed on Fridays from 1am to 3am Vegas time. I’m constantly talking about what I’m doing on there. I’m getting up everyday and trying to do something positive. I think it might be inspiring to other bands too.”

Shining additional light on the original material that will be forthcoming from The Saints Of Las Vegas, Muscat reveals, “My idea, if we can do it, is to release a song online every 28 days. So, by the time the end of summer comes around in late August, we have a record. It’s going to be collaborative, we all have songs. I’ve got a few more old ones from back then that are really good. I’ve actually got a song I did in Japanese that I’m going to release. I always thought, and not to put Taime down, Taime’s excellent for Faster Pussycat; he’s got a really unique voice. But I always thought if we had a really great, clean singer that ‘House Of Pain’ would have been even bigger. ‘House Of Pain’ was huge, it was a number one video on MTV; but chart-wise, I think it went up to 28. I think if would have had, say – I’m just giving an example – someone like Sebastian Bach singing it, even a Kip Winger or Axl Rose, I think that song would have been twice as big.”

“I think our next single is going to be Anthony’s song called ‘Panic Room’. My single (‘Tomeka’) is kind of rock / pop, but I’ve had it forever, I wanted to put it out. Our new stuff is a little harder and heavier. Also, if people Like our Facebook page, we’re giving away a guitar soon. We’ve got a magic number we want to hit as far as Likes on The Saints Of Las Vegas page. As soon as we do it, we’ll put everyone’s name in a hat, and draw for an acoustic guitar that I’ve played on TV. We’ve already given two guitars away last year, Dirty Tequila guitars. We’re giving away another electric guitar to whoever makes us the best lyric video for ‘Tomeka’. If they want the lyrics, they can just go to The Saints Of Las Vegas page and ask for them.”

Until The Saints Of Las Vegas embark upon their North American tour in late summer / early fall, the band is still playing frequently in Vegas. “People can see us. All they have to do is go to The Saints Of Las Vegas on Facebook, you’ll see all of our dates there. We’re playing Virgil’s BBQ, its great. We’re playing another place that’s really awesome and romantic, very fun to dance, called The Blue Martini; it’s off the lower south end of The Strip. Then we’re going to be playing outside the T-Mobile Arena prior to every Golden Knights home game, and in front of the New York New York hotel on the Brooklyn Bridge. We’ll do some Faster Pussycat songs for people, and I was in L.A. Guns for a while (2000, 2002 – 2003). I played with (original Guns N’ Roses drummer) Steven Adler, I have so much to reach back into, so much history. I can play a lot of that live, along with the new songs.”