BRET MICHAELS - "Being A Diabetic Was One Thousand Percent A Driving Force Behind What I Would Become"; The Big Interview With Dan Rather Sneak Peek Video 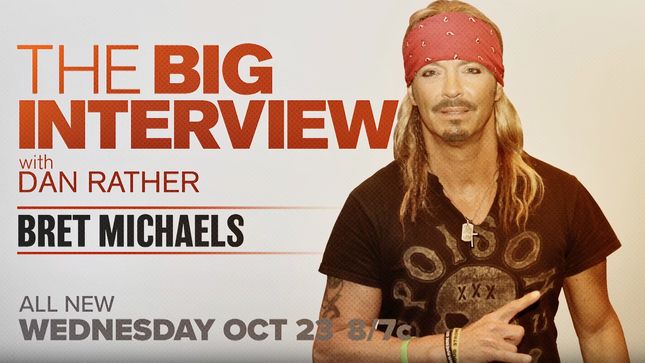 AXS TV's popular sit-down series, The Big Interview, is back for the second-half of its seventh season, with the next episode airing Wednesday, October 23 at 8 PM EST.

On the upcoming episode, singer, songwriter, and reality TV star, Bret Michaels, talks to Dan Rather about the challenges of living with type 1 diabetes, his early songs with Poison and his successful solo career. Watch a sneak peek video below:

"It is a pleasure to have the opportunity to speak with these entertainment icons each week," Rather said. "It is a rare treat to be able to delve into a side of these artists that the public doesn't often get to see, as they tell their stories and share their thoughts in their own words. I am humbled that the series has been so warmly received by AXS TV's audience, and I look forward to showing our viewers what we've been working on in this upcoming fall cycle."

"The first-half of this season of 'The Big Interview' was one of the best yet, and AXS TV is proud to finish the year strong with 12 more insightful episodes when the series resumes its fall cycle," said Lucia McCalmont, vice president of programming and scheduling, AXS TV. "The second-half of season seven features an eclectic guest list highlighting top talent from the realms of music, movies, and sports, and offering something for everyone to enjoy. Dan Rather's ability to get these superstars to open up about their achievements, challenges, and legacies has really resonated with our viewers, and we look forward to providing them with even more of the high quality discussions they've come to expect when The Big Interview returns."