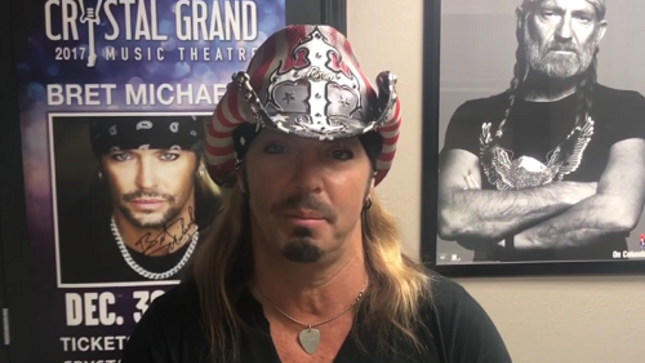 Poison frontman Bret Michaels had been scheduled to host a special StageIt performance / question and answer session on December 31st. However, that did not go as planned due to elements beyond Bret's control. Bret's management has issued the following statement:

"Due to inclement weather where we currently are, the Wi-Fi signal on the tour bus is extremely unpredictable. In the best interest of our fans we want everyone to have an amazing experience and with that being said, we have moved Bret’s StageIt event to January 9, 2018 at 9:00p.m EST. For those of you who have previously purchased tickets, please hang on to your email confirmations as they are valid for the rescheduled date. There is nothing you need to do except tune in on this new date for what will be an amazing, intimate and interactive performance on a night where Bret will also answer your questions. To purchase your tickets for this event, please visit this location."

Says Team Bret: "As with all Bret’s previous StageIt performances, there will be great prizes and songs that you have never seen him perform. Bret has raised more money this year than any other year with his Life Rocks Foundation and we want to go out even bigger. All money from this StageIt shows goes into Bret’s Life Rocks Foundation and right back into other charities including, but not limited to those supporting such initiatives as Hurricane Harvey relief, veteran charities, animal rescue organizations and research for the cure for diabetes."