BRET MICHAELS On Rumoured MÖTLEY CRÜE, DEF LEPPARD, POISON Tour - "I'm Thinking This Week We May Be Mentioning Something" (Video) 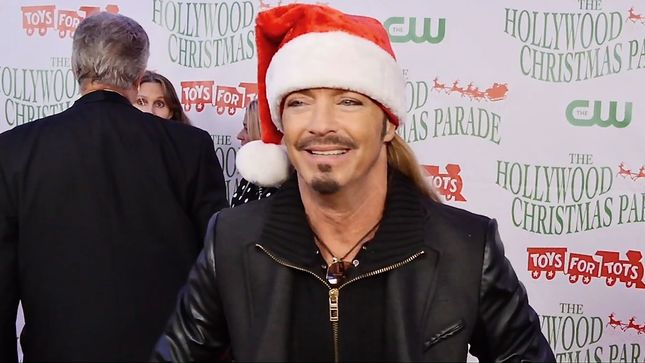 Bionic Buzz covered the 88th Annual Hollywood Christmas Parade red carpet, and spoke with Poison frontman, Bret Michaels (see video below). The brought up the rumoured Mötley Crüe/Def Leppard/Poison tour in 2020, and asked Bret how he got Mötley Crüe to reunite.

Says Michaels, "Here's what happened... everyone who knows this about me... I came in the spirit, right? I always try to throw what I call gratitude and a positive attitude out there. So I kept throwing the good vibes out there. I said, 'It would be insane for the fans if we had DEF LEPPARD and POISON, and then if MÖTLEY CRÜE would pull it back together, that would be incredible.' It's only a rumour right now, but I'm thinking this week, early, we may be mentioning something. It'll be incredible."

Asked about the possibility of all three bands taking the stage together to perform a song, Bret replies: "If you're asking me, everyone knows when they come out on the road with me, I bring everyone up on stage. It's like a big jam at the end of the night. We're hoping that that's gonna happen. But no matter what happens, I ask for one thing... that all the bands on this put an amazing, amazing show on for the fans; that's all. Everyone's having fun. 'Cause we want the fans to have fun, but I wanna have the time of my life too."

Last week, Poison launched a countdown clock on their official website, which is due to time out on December 4 at 4:30 PM, EST. All bets are on something to do with the upcoming tour.