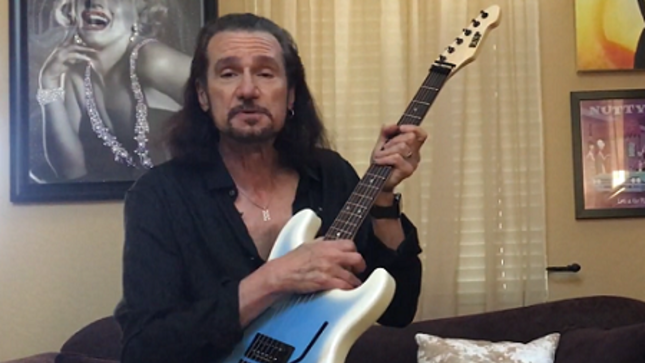 Former KISS guitarist Bruce Kulick features his Flip Flop Blue ESP in the April edition of KISS Guitar Of The Month, which can be seen below.

"My relationship with ESP Guitars started in 1985," says Kulick. "The M-1 model (single pickup super Strat style) was something I was immediately attracted to. Just in time for the KISS Asylum tour, this unique Flip Flop blue burst finish was something I was thrilled to perform with. It featured an alder body, originally an EMG pickup, later changed to Seymour Duncan, black Floyd Rose, black tuners, rosewood fingerboard, and a small headstock with the large ESP logo."

"I used the guitar during my featured solo on the Asylum tour, and it appears in the Hot Licks guitar instruction VHS as well. This replica was gifted to me last year by the custom shop of Japan. It is VERY close to the original ‘85 guitar which hangs in a display case at the Hard Rock Cafe in London England. Colorful and powerful, I immediately think of my exciting early KISS years when I see this fantastic Flip Flop Blue ESP M-1!"

Enjoy this year's previous episodes of KISS Guitar Of The Month as well.

January 2020: Bruce shares his ESP Explorer, used on the Revenge tour and beyond, and featured on the cover of KISS Alive III.

February 2020: In this video Bruce shows off a 1989 Fender Strat used during the recording of the Revenge album.

March 2020: This month Bruce shares his replica of the ESP M-1 multi-swirl model. The original was featured in the "Who Wants To Be Lonely" video and on the Asylum tour.