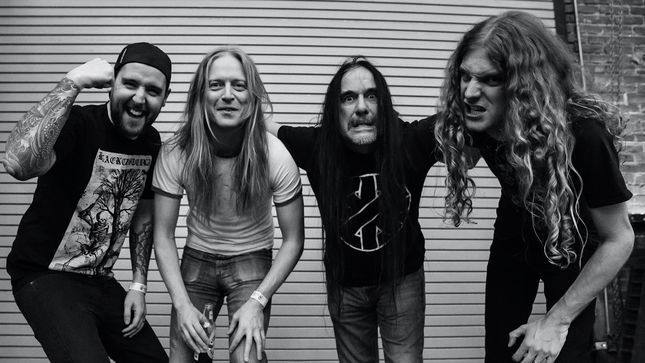 English death / grind legends Carcass had been gearing up to release their new album, Torn Arteries, on August 7th via Nuclear Blast. It's since been delayed because of the global Coronavirus crisis. A statement from the band reads:

"Well there's no way our new album is gonna get released in August now, what with the ongoing pandemic, CD & vinyl manufacturers have closed and label distribution has been put on hold for the foreseeable future. There's more pressing things to be concerned with right now, correct? Bunker down, look after yourselves, let's see the next few months through and we'll get the album released as soon as there's some kind of return to 'normality.' Enjoy this tune in the meantime."

The aforementioned tune is "Under The Scalpel Blade", released in December 2019. Bassist / vocalist Jeff Walker commented, "It’s always difficult trying to decide what new song to expose people to, especially given an absence of nearly seven years???? With that in mind here’s a slow throw away number we cobbled together, and NO the title was NOT plagiarized from the DISORDER album of the same title before you ask!"

In regard to the title of the new album, Torn Arteries, guitarist Bill Steer revealed to Australia's Heavy, that it was taken from a demo tape recorded by founding drummer Ken Owen when he was a teenager.

Steer: "He had a fictitious band called Torn Arteries and he recorded everything himself in his bedroom; guitar, and he'd actually bang on boxes and kind of scream into the mic. And the whole thing was so distorted, it kind of sounded super heavy, even though essentially you were listening to a guy with a Spanish guitar and a couple of boxes. I think Jeff (Walker / frontman) appreciates the connection to the past and the fact that it was another Ken Owen classic. So that was his choice, really, and it stuck."

Owen suffered a brain hemorrhage in 1999 and has not performed with the band in over 20 years, but according to Steer is still part of the band.

Steer: "Even though Ken isn't playing in the band as such right now, he's kind of involved in everything we do, stylistically, because when he was so unique. When he was playing drums, his approach was just totally different. Also, the riffs he came up with, they were just really far out there. They were loads of fun to learn. I still think, as a guitar player, some of the stuff was very unorthodox and it was quite a challenge. That kind of influence still runs through what we do today."