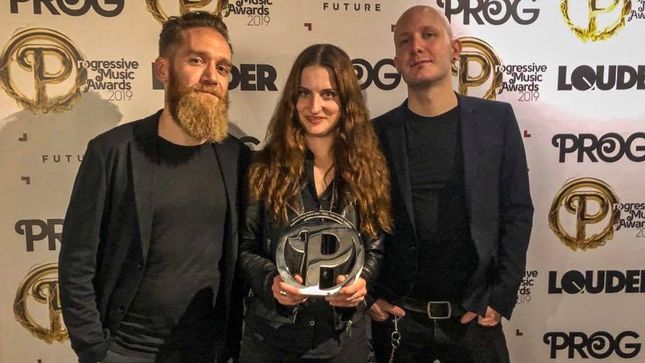 Switzerland's Cellar Darling have firmly made the prog scene their home with their latest album, The Spell. The concept album tells the haunting story of a girl who falls in love with death through 13 chapters of powerful music and the unmistakable voice of Anna Murphy.

Last weekend, the trio received a prestigious Progressive Music Award for video of the year with one of the chapters of that tale, "Insomnia", thus further solidifying the band in the world of progressive rock and progressive metal. This year's Prog Awards took place at the legendary Shakespeare's Globe in London and saw the likes of YES, Dream Theatrer and Nick Mason strolling among the guests.

The band comments: “We are super grateful to Prog magazine for the support they’ve given us from day one, for the award, and for the amazing night. It was an unbelievable honour to walk across the same stage as the likes of Nick Mason, Dream Theater and many other incredible artists. Thank you Costin Chioreanu for the amazing work on the video. Most importantly though, THANK YOU to our amazing, unbelievable fans who voted for us and made this possible!”

The entire album will be visualised with animated music videos to present the whole story of The Spell in the enchanting and unmistakable style of Costin Chioreanu’s visual imagination. The remaining videos will be released later this year to complete the story so far.

Watch the story so far, here.

* no Forever Still
+ no Oceans