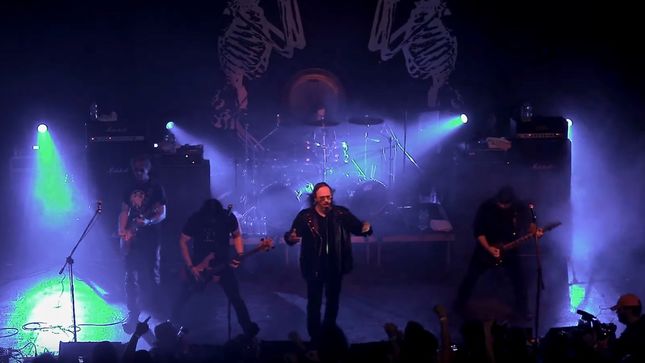 On October 25, Cirith Ungol will release their new live album/DVD, I'm Alive, via Metal Blade Records. Capturing Cirith Ungol at the peak of their darkened, mystical powers before a rapturous crowd at the Up the Hammers festival in Athens, Greece, this recording showcases the magic and might of the band onstage. It's accompanied by additional performances recorded at the Hammer of Doom (2017) and Rock Hard Festivals (2018) in Germany. For this monumental release, a special in-depth documentary spanning 2 hours in length was recorded, which includes exclusive interviews about the history and legacy of the band, as told by the current and original members.

Once again, acclaimed fantasy artist Michael Whelan (whose images adorn each cover of Cirith Ungol's four studio albums) has created the perfect visual accompaniment for the musical content. It's only fitting as Whelan's breathtaking artwork is inextricably intertwined with the music and mythology of Cirith Ungol in the hearts and imaginations of metalheads worldwide.

For a preview of I'm Alive, a video for the title track (live at Up The Hammers Fest) can be seen below.

Pre-order the album/DVD here in the following formats:

Cirith Ungol was formed in Ventura, California, in the early 1970s, emerging from the hard rock / progressive rock tradition epitomized by the likes of Grand Funk Railroad, Blue Oyster Cult and Sir Lord Baltimore. Rather than passively channeling their influences, the band was driven to forge an altogether heavier, darker, more apocalyptic sound. Cirith Ungol's lyrical approach was profoundly influenced by the high fantasy literature of J.R.R. Tolkien (from whose Lord of the Rings opus they derived their name) and Michael Moorcock, fittingly enough because co-founding members drummer Robert Garven and guitarist Greg Lindstrom first met in a seventh-grade English literature class.

The band first appeared on the scene with their self-produced and self-financed debut album, Frost and Fire, via their own Liquid Flame Records imprint in April 1981. Cirith Ungol would go on to release an additional four studio albums, two compilations of their own material as well as appearing on various compilations over the years. Finally, after years of frustration took their toll, Cirith Ungol was laid to rest in May 1992.

As time went on, the clamor for Cirith Ungol's return would not be silenced. In late 2015, against all odds, long-dead embers began to smolder and glow. After intense deliberation and contemplation by the involved members, the slumbering giant awakened. The quartet of drummer Robert Garven, vocalist Tim Baker, and guitarists Greg Lindstrom and Jimmy Barraza began to knock the rust off and rediscover the magic. The band recruited Night Demon bassist Jarvis Leatherby, a seasoned musician, lifelong fan and one of the driving forces behind the decision to reanimate Cirith Ungol, to join on bass.

After years of waiting, fans will finally receive an extensive release from Cirith Ungol this fall with I'm Alive. Truly an unforgettable night in the history of this legendary band, this cult quintet rocks harder than ever, more than four decades after their inception. Long may they reign.