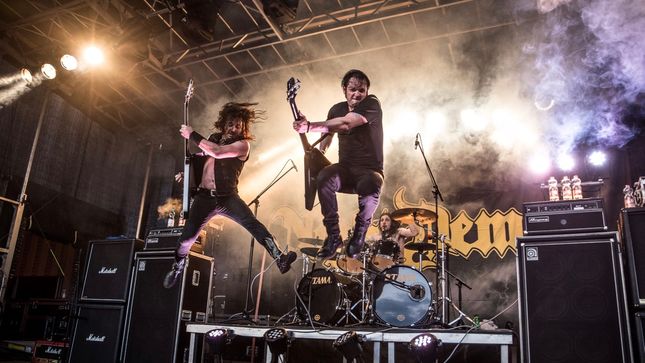 Took a while to count all the cash and get the food transported, then officially weighed, but mastermind/WJCU DJ Bill Peters is ecstatic to report:

"A RECORD BREAKING YEAR ACROSS THE BOARD!!! Our cash donations completely shattered the previous high from 2015 by over $4,000! Food donations surpassed the previous 2015 high by 30 lbs. We also had our first official sellout!"

As if that weren't enough good news, the monetary donations are technically, still not complete, as there were two online raffle prize auctions that end next week, then those will be added to the cash totals.

Headliner Night Demon, who were in town to record a live album also pitched in, financially donating $400 from their merch sales towards the food drive.

Here is a statement from Jarvis Leatherby to the metal fans of Northeast Ohio: "For once in my life it’s difficult for me to articulate and put into words my feelings on paper, but I will do my best here…

"It’s been a long hard road for Night Demon since we made the conscious decision five years ago to put our personal and professional lives on hold, and take the journey down the path of the ultimate rock and roll fantasy.  While a lot of great things have happened for us along the way, none of it has come easy.  It has taken the most extreme sacrifice, hard work, patience, and dedication to stay grounded through all of the difficult times, and keep our focus on the big picture of turning dreams into reality.

"I’m constantly asked in interviews to explain the difference between the fans and audiences in different parts of the world.  While many believe Europe has the biggest and best fanbase for heavy metal, I can tell you first hand that while they are dedicated and in large numbers across the pond… a metalhead is a metalhead wherever they are in the geographically, or wherever they come from culturally.  One of the keys to Night Demon’s success have been the willingness to travel the globe many times over and deliver our message in person to any and all fans who desire what we have to offer.  There is no stage too large, and no stage too small.

"When the idea of doing a live album came up, many people close to us thought it would be best to execute this in areas such as Europe, Latin America, or South America due to the obvious fact that these are the places that are hotbeds for the band, and have the most dedicated fans per capita in a concentrated area.  However, in our minds we already knew where this performance needed to take place.  Cleveland, Ohio.  Yes, you heard me right.

"While the above would make sense for us to take the easy way and capture our juggernaut stage performance in front of a foreign audience and put it on wax, much like everything we do… we never look for the easy way out.  It is our goal to show the rest of the world that despite their misconceptions that rock is dead in the United States, we really do have the true spirit still running through our veins, and that has never left the die hards who continue to live and breath this lifestyle.  In the words of Grand Funk… “We’re an American Band!”

"I remember back to our very first tour when we showed up in Ohio and knew absolutely nobody!  We struggled hard to find a place to stay, while we were in limbo waiting in town four days for our next gig.  It was literally freezing cold and we were trying to find the nearest Walmart, or coffee shop to loiter in just to get warm enough to feel our fingers.  When we finally turned up to the show in Akron, we were completely blown away to see the audience full of people singing along to the words!  After the show we talked with fans who told us about this guy Bill Peters who had been playing our debut EP on his Metal on Metal radio show for the previous year, and was the reason all of them got turned on to the band.  A lot of them thought we were an English band, purely based on our sound.  When the reality is that we were just hard working struggling Americans just like they were.

"Since then we have had what seems like the impossible, become an absolute truth.  The fans in that area have continued to grow in large numbers into a dedicated frenzy for Night Demon, and have opened their hearts and their homes to a band who just wanted to share with them the true passion of rock and roll.  I can proudly say we now share this together, and have been able to document it in history with this live record.

"When I was a kid and heard KISS’ "Detroit Rock City", I was fascinated by a place that they described as the heart and soul of the band’s ideology.  It’s safe for me to say now that my band has it’s own place for that now, and it’s there in the blue collar hearts on the shores of Lake Eerie.

"The fact remains we are an honorary British heavy metal band from the punk rock beaches of Southern California with a heartbeat from Northeast Ohio.  We are so grateful to have you as a part of our family.  You guys really are THE HEART OF IT ALL!  Thank You." - Jarvis Leatherby