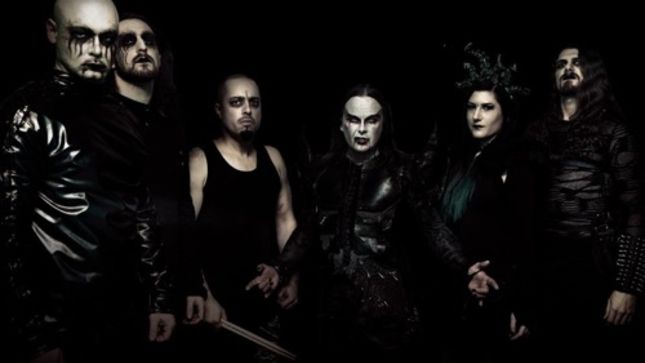 UK-based black metal heathens Cradle Of Filth have checked in with the following update on the recordings for their new album:

"Tuesday, January 20th marks the onset of Cradle Of Filth bassist Daniel Firth heading into Grindstone Studios in the haunted wilds of Suffolk, England, to add his five finger prowess (six finger if he actually lived here!) to the new Cradle album, code named Hammer Of The Witches.

This grand opus nocturne, which is destined for release via Nuclear Blast on June 26th, has already borne witness to drummer Martin 'Marthus' Skaroupka and guitarists Marek 'Ashok' Smerda and Richard 'Haunted' Shaw committing their very respectable talents to the proceedings; now it's time for the true 'bass' of evil to show his mark, before singer Dani Filth wraps his iron lungs about the tracks next week.

Please join with us, our unholy Cradle Coven, in wishing bassist Daniel all the best as he thrashes his way through such crepuscular tracks as 'Misericord', 'Enshrined In Crematoria', 'Deflowering The Maidenhead, Displeasuring The Goddess' and 'Yours Immortally' over the coming few days and nights."

Cradle Of Filth's 2015 tour schedule is currently as follows:

Cradle Of Filth is: