DAVE MUSTAINE Says MEGADETH Hope To Release New Songs Ahead Of European Tour - "It Might Be Two, It Might Be Four" 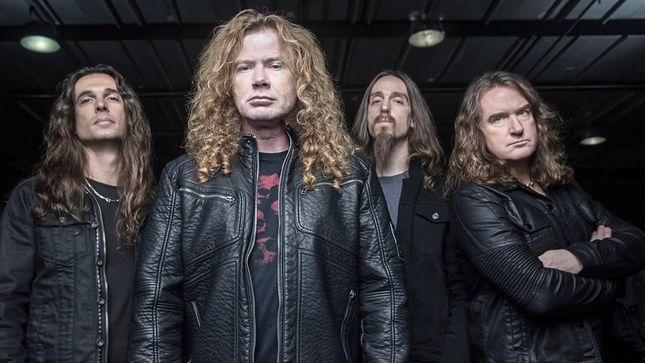 Dave Mustaine has revealed to Rolling Stone that Megadeth hope to release new music ahead of their European winter tour run with Five Finger Death Punch.

Megadeth had hoped to record the follow-up to their 2016 album Dystopia this year, but frontman Dave Mustaine’s cancer diagnosis sidelined their progress. But despite the medical setback, he is promising to release a handful of new tracks ahead of the band’s winter European tour.

Before Megadeth paused work on the LP, Mustaine tells Rolling Stone that they had composed “nine really crushing songs.” They presented those to their management, and Mustaine was pleased when various people who worked with them all picked the same three tracks to release. (The group will put finishing touches on those in the coming months.)

“All we need to do is get in the studio and capture them,” he says. “We’ve got scratch drum tracks. We just have to get Dirk [Verbeuren, drums] to play through the songs once or twice and then it’s up to me and David [Ellefson, bass] and Kiko [Loureiro, lead guitar] to finish.”

He doesn’t have finished names for the songs yet, just working titles - “The Dogs of Chernobyl” has a feel similar to Dystopia, while he says “Faster Than Anything Else” and “Rattlehead, Part Two” speak for themselves. The exact number of songs Megadeth will release as “early offerings,” as he called them in an interview with Rolling Stone this week, is still up in the air. “It might be two, it might be four,” he says.

Megadeth will join Five Finger Death Punch as special guest on their 2020 European Winter Tour, with supporting band Bad Wolves. The tour will visit 14 European countries starting on January 20 at the Hartwell Arena in Helsinki, Finland and ending on February 20 at the Budapest Sportarena in Budapest, Hungary.