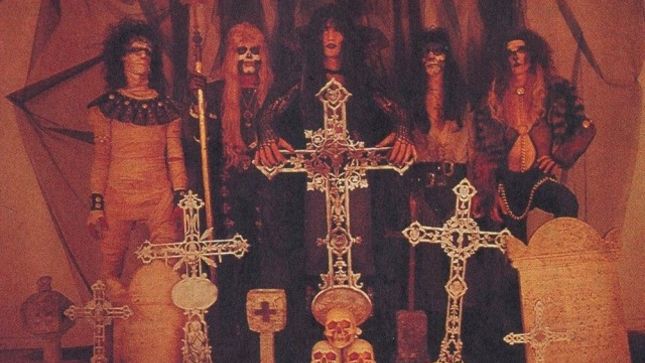 Shadow Kingdom Records has announced the signing of Italy's legendary Death SS for the reissue of the band's first three albums: 1988's ...In Death Of Steve Sylvester, 1989's Black Mass, and 1991's Heavy Demons. Each album will be released on CD, vinyl, and cassette formats, (as well as digital) with a t-shirt design produced for each album cover. Additionally, each of these three classic albums will be faithfully restored to their origin sound and design, as per the band's specifications.

Long a cult name in the international heavy metal scene, Death SS have influenced thousands over the past three decades in their long, twisted history, equally influencing the nascent speed metal and black metal scenes with their trademark ghoulish and theatrical presentation. Shadow Kingdom couldn't be prouder and more honored to have Death SS amongst its roster, most of which have been shaped by the band in one way or another.

Founded in 1977 by vocalist Stefano Silvestri - whose initials gave the band their "SS" appellation - the first Death SS lineup was soon complete with the addition of guitarist Paolo Catena, bassist Daniele Ugolini, and drummer Tomaso Castaldi. All four members took artistic names the way their names would be in English: Steve Sylvester as The Vampire, Paul Chain as The Death, Danny Hughes as The Mummy, and Tommy Chaste as The Werewolf. Steve Sylvester and Paul Chain soon started to compose their first songs: "Terror" (1977), "Zombie" (1977), "Horrible Eyes" (1978), "Murder Angels" (1979), and "The Hanged Ballad" (1979).

Contrary to popular belief, there were lineup changes from 1977 to 1982. As Steve Sylvester stated in an interview for Trumetal.it webzine on December 2005, "Danny Hughes were really two individuals, the same way Tommy Chaste were three. It all came from my haste to quickly establish the names of the musicians that were part of the band, in a sort of magical pact. The first Danny Hughes (Daniele Ugolini) was the first guy that played the bass on the band, but […] he was substituted by Gabriele Tomassini, who became the new Danny Hughes (II). As for the musicians nicknamed Tommy Chaste, nothing is known about the first out of his real name (Tomaso Castaldi). The second was Franco Caforio (who lately gained fame with the Italian rock band Litfiba) and took the name of Thomas Chaste. The third one (Andrea Vianelli; the first one to be called with the compound name Thomas Hand Chaste) entered in Death SS in October, 1980. There’s only one recording available previous to the entrance of Andrea Vianelli, that is the rehearsal version of 'Zombie' from 1979 released on Zombie/Terror single, contained in The Cursed Singles boxed set (1995)."

Claudio Galeazzi (Claud Galley, The Zombie) also entered in the band in 1980 as rhythm guitar player, and Death SS became a quintet. This lineup recorded the demo The Horned God of the Witches (1981), unreleased as such for the general public (only two copies exist) but contained in The Story of Death SS compilaton LP (1987). The Mummy (Gabriele Tomassini) left in 1982, and Claud Galley took the bass instead. Again as a four-piece, the band recorded Demo II, which included "Horrible Eyes," "Cursed Mama," and "Kings of Evil." Other songs were composed but not recorded before Steve Sylvester left the band: "Welcome to my Hell," "Inquisitor," "Black And Violet," and "Chains Of Death," for example, would see the light in other points of Steve Sylvester’s and Paul Chain’s careers.