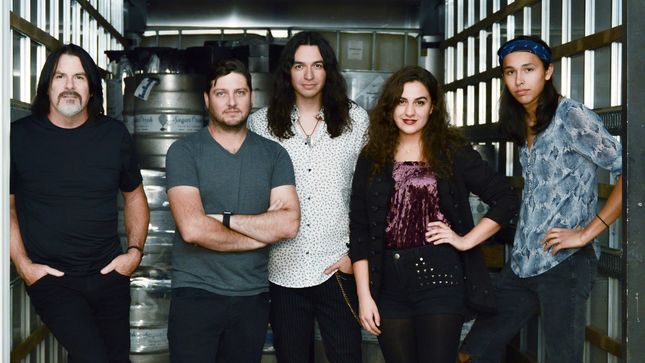 Frontiers Music Srl recently announced the release of Decarlo’s debut album, entitled Lightning Strikes Twice, on January 24. Listen to the album track "There She Goes" below, and pre-order the album here.

The band Decarlo originated in Charlotte, North Carolina. Fronted by Tommy DeCarlo, best known for having performed with Boston since 2007, he co-founded the band with his son, guitarist Tommy DeCarlo Jr. As Tommy tells it, Tommy Jr. is truly the backbone of Decarlo. He has a great feel for what's going to work on stage, not just musically, but production wise, too and leads the charge in the band's performances. Of course no band is complete without a great supporting cast, which in Decarlo's case is provided by drummer Dan Hitz, bassist David Netta, and newest member Payton Velligan, who's a multi-talented keyboardist/guitarist/vocalist.

The band's debut album, Lightning Strikes Twice, is a very fine slice of melodic rock, deeply rooted in the sound of masters of the genre like Boston, Foreigner, Survivor, and REO Speedwagon.

"Without question, musically Tom Scholz has been my biggest influence. He along with Brad Delp created pure magic in the studio,” tells Tommy DeCarlo. "Brad with his amazing voice and Tom of course being one of the best songwriter/producers I've ever heard, touched not only me, but millions with their recordings. I could name quite a few other bands that influenced me as well, but none as much as the music of the band Boston!”

"We're very excited about the release of Lightning Strikes Twice!," continues Tommy. "As an artist/songwriter you're always going to be proud of your work, but there's nothing more gratifying than to please those who matter most...the fans! It's our hope that the music on this debut release will in some way/shape or form touch those who take the time to listen to it."