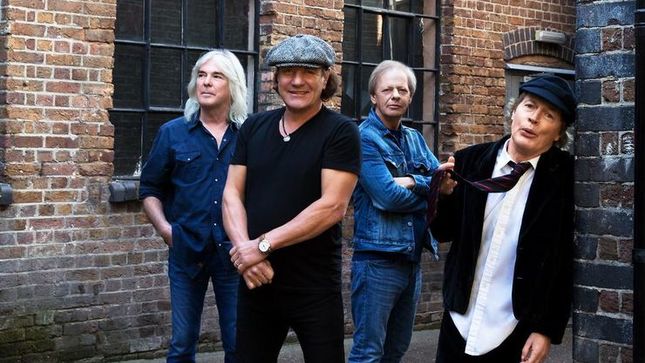 Snider related: "I had dinner with (AC/DC singer) Brian (Johnson) recently, and we talked about the band returning to record. He told me a lot of stuff, and a lot of stuff that I don't wanna say. But we know from the photos, and Brian confirmed it, they've been in the studio, they've been recording. The original, I don't say the 'original' guys, because a lot of 'em are gone, but I say the 'classic' lineup is back together and there are some surprises, which I can't talk about, regarding Malcolm Young that just had my jaw on the floor. I will say he will be present. So this is AC/DC as we know and love them."

Gina Dilecce has launched a petition to have AC/DC perform at next year's Super Bowl halftime show.

She says: "It’s been a while since we’ve had some REAL METAL play the halftime show for the Super Bowl. Don’t get me wrong, ALL MUSIC artists have done a great job and SHOULD play the show, but we all need a turn. It’s time for some rock and roll! And who better than AC/DC to play?! They are coming back together, making a new album and possibly touring again. This would be perfect!! Come together, metal heads, and get this going! Dee Snider of Twisted Sister is WITH US!!"

At the time of writing, 2,133 people have signed the petition. Add your name to the growing list here.

Hear what Twisted Sister legend Dee Snider has to say about the situation: