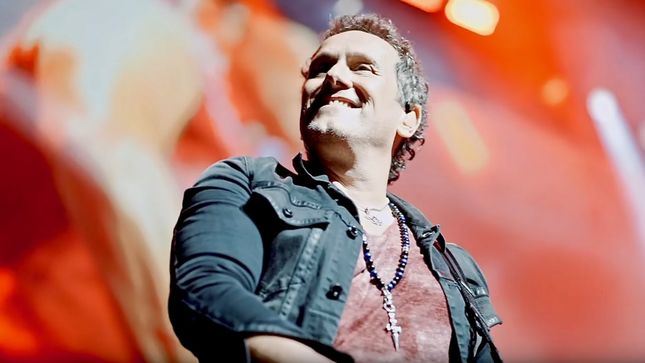 Def Leppard have released this new video, taking you behind-the-scenes at their show in Moncton, New Brunswick on July 13:

A special gift from Queen guitarist Brian May, a sold out show, and a fantastic audience. Watch Def Leppard frontman Joe Elliott's Captain's Log #1 from Halifax, Nova Scotia (Canada), below:

Def Leppard performs next on Friday, July 19, at Canadian Tire Centre in Ottawa, ON. Find the band's tour itinerary here.

Ahead of Def Leppard's concert in Saskatoon (Canada) on July 27, guitarist Vivian Campbell spoke with Saskatoon StarPhoenix about the band and the Canadian leg of the tour. An excerpt from the chat follows:

Q: There’s a rumour that there’s some new music on the horizon from you guys, maybe coming out next year. How much truth is there to those rumours?

Vivian Campbell: "The one thing I can’t say is when it’s coming out. We’re certainly working on new music, and it’ll certainly be next year we’ll be working on it 100 per cent, but I don’t know when it’ll be complete. With Def Leppard, that’s always a dangerous prediction."

Q: So it’s in the books, but no due date from the teachers yet?

Campbell: "Yeah! There’s some new songs being kicked around. I don’t know when it is we’ll actually get around to getting the five of us in the same place to record it - I assume that would be sometime early next year - and I don’t know what it’s going to be, if we’re just going to aim for doing a couple of songs or a full album.. there’s always something on the go. Everyone in the band is a writer, everyone has ideas going, it’s just a question of when we collectively focus on trying to make that commitment to get together to make a record, and that’ll definitely be sometime next year."