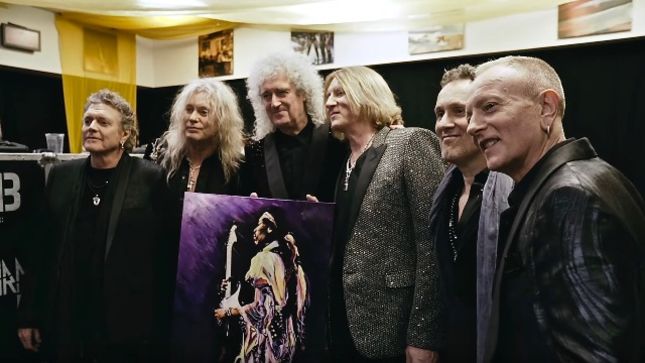 Phil Collen of Def Leppard fame recently spoke with Rock Candy about the band's induction into the Rock And Roll Hall Of Fame. Following is an excerpt from the story.

“Personally it doesn’t mean anything,” he admits to writer Jon Hotten in the latest issue of Rock Candy Magazine. “But for the fans it’s awesome. In the 15 years or whatever it is since we’ve been eligible, they’ve been pissed off on our behalf. You know, ‘You guys have got two diamond albums, so how come you ain’t in?’”

Having been an integral member of Def Leppard for over 35 years now, Collen feels the band is every bit as creative today as it ever has been.

“The concept of our band was always to create a hybrid between Queen, Zeppelin, AC/DC, Rush, Prince… anything and everything. The last tour we did was our best, and that excites me. It keeps us going. It’s magical, it really is.”

Read the whole in Issue #13 of Rock Candy Mag, available in shops worldwide or direct from us online at this location.

Def Leppard were inducted into the Rock And Roll Hall Of Fame at the Barclays Center in Brooklyn, New York on March 29th. The event will be broadcast on US TV on HBO on Saturday, April 27, at 8 PM, EST.

In the video below, Def Leppard takes you behind the scenes for their induction:

Rolling Stone senior editor David Fricke sat down with the members of Def Leppard to discuss their legendary career, their music and their thoughts on getting inducted into the Rock & Roll Hall Of Fame. Below, the band discuss staying relevant through the 90s: