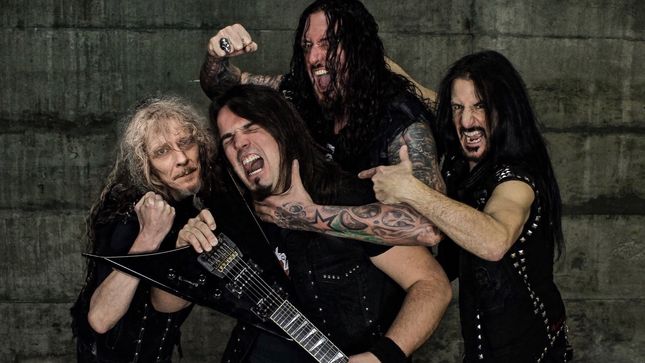 Nuclear Blast Records has announced that German thrash legends, Destruction, have signed a new record deal with the label.

Founded in 1982, Destruction soared to the top of the national thrash metal movement, with albums like Infernal Overkill and Eternal Devastation tucked away in their impressive heavy metal arsenal. Even the band’s later work such as All Hell Breaks Loose or The Antichrist are glorious moments in thrash, highlighting why Destruction are part of the “Big Teutonic 4”... and still touring the world with great success.

After the latest successful Nuclear Blast releases Day Of Reckoning (2011), Spiritual Genocide (2012), Under Attack (2016) and the newly recorded best of, Thrash Anthems II, the band have decided to sign a new deal with the label so that the formidable pairing can continue to produce even more greatness.

Mastermind Schmier states: "Somehow this came by surprise and I know that sounds weird but we were so focused and excited about finishing the new album, that the paperwork did not really matter to us at that time! When we did realize that our contract with the label is due, it took us only some minutes to negotiate a new deal!

"We are a part of the Nuclear Blast family now since more than 15 years, we feel at home here, we trust each other in this monkey business and also many people that work for the label we call our friends. So this re-signing is something that came very easy and natural. Working with the best label in metal is still an honor cause they supported us thru the good and the bad times! Destruction 2019 is stronger than ever, the new line up is killing & we will have more news about the upcoming record very soon - please stay tuned dear metalheads!"

Nuclear Blast Head-Of-A&R Andy Siry adds: "We are really happy and proud, that the almighty Destruction re-sign with Nuclear Blast. It is a honour for us to work with these guys. The whole band became very good friends over the years. So we are looking forward to release the upcoming new thrash metal classic - stay tuned!"

More info about the upcoming new studio album will be released next week. Stay tuned.