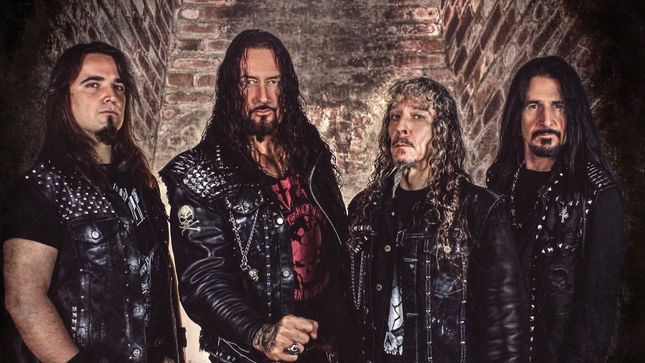 Legendary German thrashers, Destruction, have released their new single, "Betrayal". The song will be featured on Destruction's 17th studio album, Born To Perish, out on August 9 via Nuclear Blast. Pre-order the album here, and watch the "Betrayal" music video below.

Director Achilleas Gatsopoulos: "It was my honor to be entrusted by such a historic band to create a fresh visual aesthetic for their new album. It was important for me to strip things down and start with the basic raw and powerful visual elements that derive from their trademark logo: Sharp angular shapes, high contrast and a monochromatic color palette of  red, black and white. Inspired by Dario Argento's horror masterpiece Suspiria as well as by the existential portraits of Francis Bacon and mythology, we create a dark tableaus of archetypal forms of betrayal: Two-faced/deceit, Back-stabbing, Infidelity, Garden of Eden,  Wartime Snitch and we close with none other than the iconic Kiss of Judas. It was an immense pleasure to work with the guys and I am really looking forward to next time. 'Til then, enjoy the audiovisual onslaught that is BETRAYAL."

Says Schmier: “This is maybe my fave song from the new album cause of it's classic thrash feel and the very catchy chorus. Randy is all guns blazing here and Mike & Damir have an awesome solo battle! We all have our experience with 'Betrayal' and wanted an emotional, atmospheric and different video!”

Born To Perish was recorded in January & February 2019 with VO Pulver at Little Creek Studios in Switzerland and is the first Destruction album featuring Randy Black on the drums and new second guitar shredder Damir Eskic! .

The stunning cover art was created by acclaimed artist Gyula from Hungary, who has also created artwork for Annihilator, Grave Digger, Stratovarius, Tankard and many more. He has also produced a trailer where you can follow the creation of the artwork. Watch below.

Road To Born To Perish, Part 1: The New Lineup: