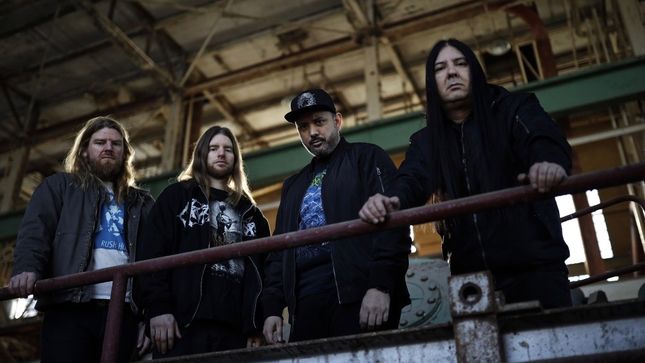 For Obscene Majesty, Devourment reunited with producer D. Braxton Henry, who played in the band on their infamous track "Babykiller" and helped craft the band's sound on their first three albums. The record also sees founding member Brad Fincher back on drums, Ruben Rosas returning to lead vocals (a formation previously only heard on the legendary Molesting The Decapitated), bassist Chris Andrews handling eight-string guitar, and Dave Spencer taking over bass. The pioneers of brutal death metal have sharpened their blades once again and are unleashing some of the most disgustingly heavy slam ever.

Clubbing blows from tracks like "Cognitive Sedation Butchery," "Narcissistic Paraphilia," and "Dysmorphic Autophagia" see the veterans as imposing and menacing as ever. Buzzsaw guitars shred through limbs against head-caving, hammering drums. Deathly, blood-soaked vocals personify pain and torture. Obscene Majesty is the epitome of uncontrollable destruction from beginning to end, as Devourment crush through break-neck speeds, deafening ears and melting faces along the way. Focusing on the very elements of gore, death, and mutilation that have crowned the band as kings of the scene for over two decades, Devourment forces you to bear witness to the Obscene Majesty.

Obscene Majesty will be released on CD, LP, and digital formats. Physical packages are available for preorder via Relapse.com here. Digital downloads/streaming services are available here.

Throughout Devourment's twenty-four years of extreme existence, one thing has remained constant: unyielding brutality. Formed in 1995 and hailing from Dallas, Texas, Devourment has remained consistent and powerful throughout several reformations, leading many to celebrate them as the heaviest death metal band in the world due to their influential blend of vicious slam elements with an old school death metal sound.

Devourment took the underground by storm with 1999's landmark Molesting The Decapitated, released on United Guttural. After dissolving in the early 2000s, they reformed and returned with Butcher The Weak (self-released in 2005; re-recorded and reissued by Brutal Bands in 2006). Unleash The Carnivore was released by Brutal Bands in 2009. On the power of these LPs, and the band's explosive live shows, Devourment soon became one of the most infamous acts in the death metal underground throughout the last decade.

In 2010, Devourment signed to Relapse Records for the eventual release of their fourth album Conceived In Sewage in 2013. The band teamed with masterful producer Erik Rutan of Hate Eternal and Morbid Angel for the album. Throughout the coming years, Devourment performed at major extreme metal festivals like Hellfest, Maryland Deathfest, and Obscene Extreme, and toured throughout the U.S., Europe, South America, and Asia.