DIAMOND HEAD Guitarist BRIAN TATLER On METALLICA Royalties - "It's My Biggest Source Of Income... I Don't Know What I Would Do Without It" 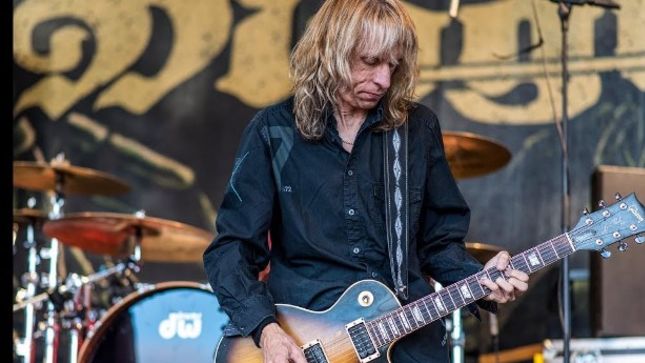 In a new interview with Sweden's RockSverige, Diamond Head guitarist Brian Tatler discusses royalty payments received from Metallica, who recorded the band's songs "Am I Evil", "Helpless", "The Prince", and "It's Electric". Read an excerpt from the chat below...

Q: About Metallica? Do you remember the first royalty payment you got from them?

"Yeah and I think it was early 90's, like 1990. We were in the red at first with our publisher. Diamond Head didn't sell any records so we never really recouped on our advance. We split in '85 so there was nothing happening. There was a publishing issue where our old publisher had some of the songs, like “It's electric”, “Helpless”, “Sucking my love” etc and it took me a bit of time to get away from him. When we signed to MCA we also signed to Zomba publishing and they were saying all the money was coming in, but it's going to our management, so it wasn't coming to me. I had to get a solicitor involved and do the homework and in the end they had to get Zomba to split the payments so my share would come to me, which makes perfect sense, and Sean's share to him. Then it went into the black and started creeping up. Of course they (Metallica) hadn't sold that many records. In '87 they did “Helpless” on “Garage days re-revisited” At one point Lars was helping me. He asked “Are you getting your royalties?” and I said “No, not really.” and he gave me a lawyer to contact and said “Speak to this guy at Elektra!” He put me in touch with people and he was determined that I would get my due and he did help in any way he could. It did take a bit of time, but it came eventually and it's never stopped flowing ever since."

Q: They played those songs early on. You get money from live performances as well don't you?

"That's PRS and at one point I wasn't in PRS. I think I joined in 1988 and I should've joined years ago, but nobody told me about it. Our management didn't know what it was, so I had to find out for myself really. Maybe I spoke to a couple of people, possibly Lars, and they said “Do you remember PRS?” and in the end I joined myself, so the money did start flowing, yes. If Metallica performed it live at the NEC or something, then I would notice and get a statement and it would say “Live performance” It took a little bit of time for it to come through. I made it my mission in the late 80's when Diamond Head wasn't happening and I didn't have much of an income."

Q: Is it decent money? Could you possibly live on it?

"It is. Yeah, I do. It's my biggest source of income. It's great and I don't know what I would do without it. It gives me the freedom to do what I like. I'm very grateful."

Read the full interview at RockSverige.se.