Did KISS’ Success Have Any Impact On TWISTED SISTER? - “It Never Mattered To Me”, Says Guitarist JAY JAY FRENCH 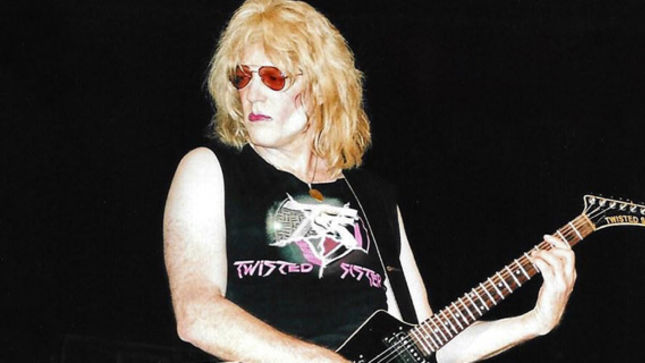 MyGlobalMind.com has issued a new interview with Twisted Sister guitarist Jay Jay French, conducted by Robert Cavuoto. French talks about the band’s We Are Twisted F***ing Sister! documentary, the resilience of the band, and more. An excerpt follows:

Q: In 1976-1978, KISS was one of the biggest rock bands; did their success impact Twisted Sister in any way?

A: “I have no idea, I never thought about it for a second. They had their life to lead and we had ours. They succeeded early on and had their own share of problems. They tell their story about how financially bad off they were and how close they came to ending it a number of times. They had their own identity crisis and had to change their image. It never mattered to me. In 1976 or 1977 Dee took me to see KISS at Nassau Coliseum and I remember thinking it was a great show. I had auditioned for Wicked Lester at some point very early on which became KISS. I knew they could make it and was really impressed by the show. I thought it was phenomenal, I thought that they really have their shit together.  We would sometimes get comments from the record labels like, “Alice Cooper has already done it”, “KISS has already done it”, or “Been there, done that already.” The press hated KISS so anytime the record label could find an excuse to say No to us they would say something like, “You suck like KISS”.”

Read the full interview at MyGlobalMind.com.

Twisted Sister have been announced as the headliner for the first annual Vegas Rocks! Hair Metal Awards, taking place Sunday, May 15th at the Casablanca Event Center At Eastside Cannery Casino in Las Vegas, NV. 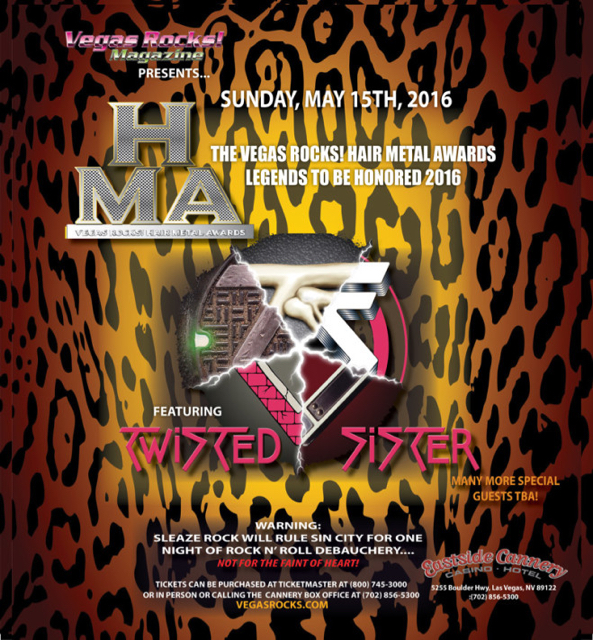 The event will feature performances with honourees and participants, including an all-star celebrity jam. It will be co-hosted by Vegas Rocks! Magazine publisher/ founder/ CEO Sally Steele, along with Nick Hawk from Showtime’s hit television series Gigolos. 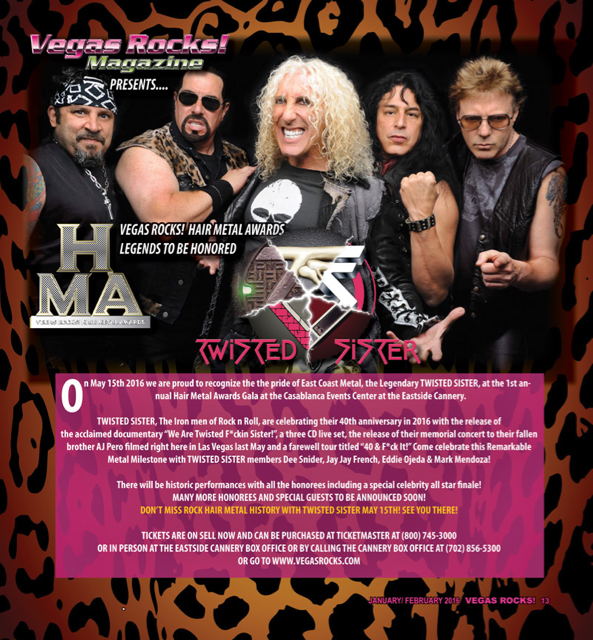 The event will be preceded by a Grand Rock ‘N’ Roll Royal Red Carpet media event at 6 PM, with appearances with major celebrities and some of the most famous rock artists in the music industry. The ticket prices for this event are from $19 - $35 for floor seats.

The Twisted Sister movie, We Are Twisted F***ing Sister!, was released in Europe/UK on February 12th via Monoduo Films. The film is available on VOD (iTunes & Vimeo on Demand) and as DVD (Amazon Europe and Monoduo Films Shop).

The setting is mid-1970s New York City: five rockers decked in platform boots and dramatic make-up embarked on a heavy metal journey. Little did they know the impact they would make, and that, forty years later, they would still be renowned for their songs, one-of-a-kind live shows, and take-no-prisoners attitude.

We Are Twisted F***ing Sister! - a new 134-minute documentary film by Andrew Horn capturing that expedition from bar band to international stardom - will be presented in theaters via Music Box Films in February. The first ever documentary of the band that defined an early MTV with their no-holds-barred music videos opens in New York and Los Angeles on February 19th with a one-night-only event at Chicago’s Music Box Theatre on February 22nd. On February 23rd in North America, the film will be released on DVD, Blu-ray, VOD, and digital formats, with an included 2 hours of bonus material and director commentary. 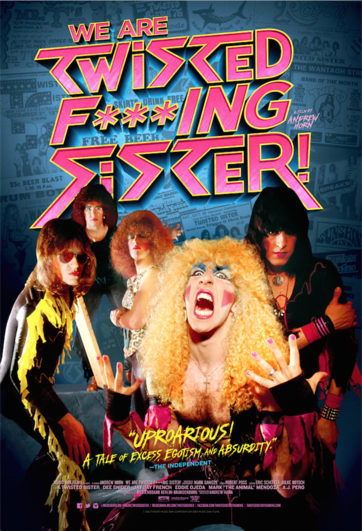 Charging out of the gate with a lethal combination of grit and glitter, Twisted Sister (Jay Jay French, Dee Snider, Eddie Ojeda, Mark “The Animal” Mendoza, and the late A.J. Pero) established themselves as one of the staple acts of Glam Rock and Heavy Metal with anthems “We’re Not Gonna Take It” and “I Wanna Rock.” However, “the band that killed disco” was no overnight success.

Director Andrew Horn, who is known for his films East Side Story (named one of the 10 best films of the year by Time Magazine), The Nomi Song, Doomed Love, and The Big Blue, said of the film:

“I realized as I was working on the film, that it was really very much a story of how a band becomes a band. They are truly unique in that their overnight success actually took 10 years, so you really get to experience everything Twisted Sister went through to do it. I have to say, I don’t think I’ve ever experienced any group of musicians as ferocious...or as funny.”

We Are Twisted F***ing Sister! puts the fan in the trenches with the band from their early, hungry days in New York City onward through their legendary career. Recounted directly from the band themselves, their managers, and biggest fans, We Are Twisted F***ing Sister! is the mesmerizing, never-before-told story of the ten grueling years leading up to the band’s break out success.

Are you ready to really get to know Twisted F***ing Sister? For more information on theatrical screenings, please visit this location (check on “Theaters”).