DIO On RAINBOW – “My Vision Of That Band Was What It Was Until I Left”; Classic 2002 Interview Streaming 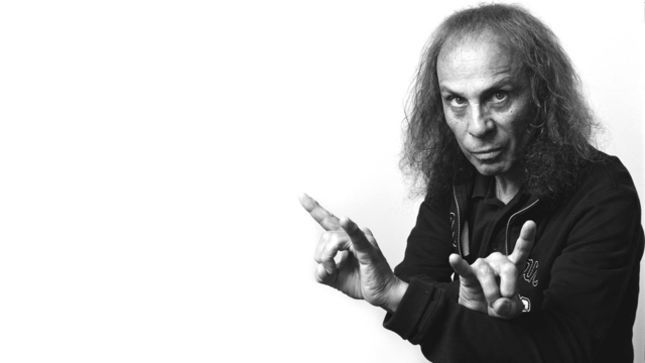 Eric Blair has uploaded part 1 of a classic interview with Ronnie James Dio from his Blairing Out show. In part 1, Dio talks about Elf and how he got to be in Rainbow.

Dio explains that his first band Elf had opened for Deep Purple on a few world tours and Ritchie Blackmore never said a word to him until one time Ritchie came up to him and said “You’re a really great singer.” Blackmore would then start inviting Dio to jam out in some clubs and asked to form a new band because Purple was turning “too funky.” Dio agreed on the condition that the whole Elf band came along with him which Blackmore accepted.

Dio goes on to say that he and Blackmore had similar musical states, starting with the classical composer Johann Sebastian Bach and that’s how they first connected. When asked about the revolving door of musicians Rainbow had, Dio said that Ritchie told him that he was “musical vampire” and as soon as all the blood was sucked out of them, it was time to get somebody to suck the blood out of.

Dio Disciples performed on Saturday (March 5th) at the street party for the Ronnie James Dio Stand Up And Shout Cancer Fund in Glendale, CA. Video footage from the event can be seen below:

The Ronnie James Dio Stand Up and Shout Cancer Fund was formed in memory of the legendary rock singer Ronnie James Dio, who lost his life to gastric cancer in 2010. SUAS has already raised over $1million for cancer research projects in its short history. Just recently, the original bass player in Dio, Jimmy Bain, died of lung cancer and Lemmy Kilmister, the celebrated leader of Motorhead, lost his battle with what was deemed an "extremely aggressive cancer" just after Christmas. These and other deaths attributed to cancer have only reinforced the commitment of the Dio Cancer Fund to support research and education that furthers early detection, prevention and treatment of prostate, colon and gastric cancers. Portions of the money raised thus far has been allocated to the cancer research work of the T. J. Martell Foundation for Cancer, AIDS and Leukemia Research, and the Gastric Cancer Research Unit of the M.D. Anderson Cancer Center in Houston, where Ronnie was treated during the last six months of his life.

The 2nd Annual Ride For Ronnie Motorcycle Ride & Concert which will be held on Sunday, May 22nd.