DOKKEN To Film Only US Reunion Show For Possible Future Release; New Song Will Not Be Recorded In The Studio 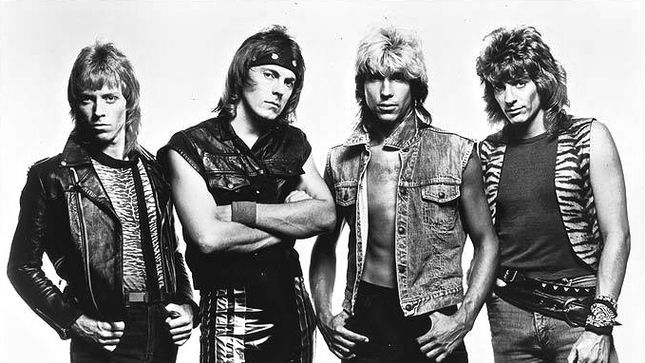 The classic Dokken lineup of vocalist Don Dokken, guitarist George Lynch, bassist Jeff Pilson and drummer "Wild" Mick Brown have announced a string of dates in Japan this October. Reuniting for six shows only, this lineup will perform in Japan for the first time in 21 years. Dubbed Unleashed In The East, Don Dokken comments on the upcoming shows: “I am very excited to come back to Japan and play with the members of Dokken that I spent so much time with. Being that its only 6 shows, we are going to make as spectacular as possible.”

Prior to the Japanese dates, Dokken will play their only US reunion show on Friday, September 30th at Badlands Pawn, Gold, and Jewelry in Sioux Falls, South Dakota. Rocker Gabbie Rae will open the show. Details and ticket information will be revealed soon.

Don Dokken guested on the August 8th edition of the SiriusXM satellite radio show Eddie Trunk Live to discuss the reunion gigs. The interview is available below.

Don: "We're right in the middle of writing a new song right now. Just one. Jeff and George wrote a riff, a music piece, with a bridge and a chorus and that. I said, 'Send it to me, and I'll pen it. I'll write some lyrics to it.' But then I actually sent it down the road to Mick, 'cause Mick's actually a really good songwriter; I think he had a lot to do with writing 'Wicked Sensation' (Lynch Mob). So Mick wrote a song, he sang it, he sent it to me, and now in the next week or so, I'm gonna try to make it a song. So I thought it would be kind of cool, if you're in Japan, to have a surprise and play one brand new song that no one's ever heard before, from the four of us. And we won't be recording it. We'll be doing it live in Japan. We'll probably do the song live at the live video taping at the South Dakota concert; that'll probably be the first time we do the song. And then we'll do it in Japan. That way, it'll be a nice little tidbit when the DVD comes out."

The Japan tour will launch on October 5th in Osaka, Japan, then heads to Fukuoka, Tokyo for the Loud Park Festival before continuing on to Hiroshima, Aichi and finally, back to Tokyo for the last show on October 12th.

Dokken’s Tooth And Nail, released in 1984, contained several hit songs including "Alone Again", "Just Got Lucky" and "Into the Fire", and sold over three million copies worldwide and the band continued releasing many more records with the same success.

Tickets for this once in a lifetime event, as well as VIP package experiences, will go on sale on August 27th. This will be the one and only opportunity for fans to see the original lineup play their iconic hits.

Drummer “Wild” Mick Brown joined Mitch Lafon for Episode #223 of One On One With Mitch Lafon back in May. He discussed the upcoming reunion and the confirmed Japanese tour dates.

About the Dokken reunion Brown said: “In spite of ourselves, we always seem to do well. You have to decide - I'm in or I'm out. Let it go and play ball... Somehow, it seems to work out. It's never very easy and I'm sure it's not going to be this time either."