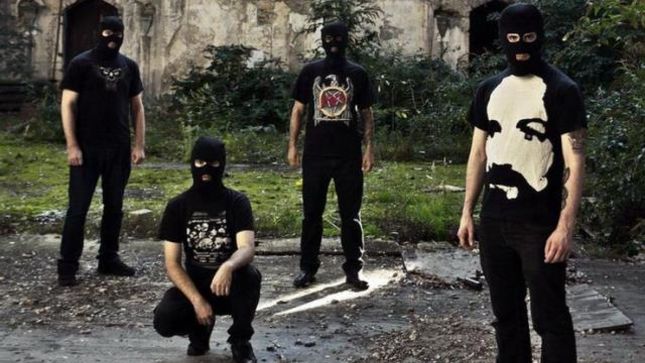 New light has been shed upon the malevolent and malicious collaboration between the nihilistic Dragged Into Sunlight and masters of the macabre, Gnaw Their Tongues – N.V., a five-song exorcism due via Prosthetic Records on November 13th. Five years in the making, the 32-minute release was produced by Justin Broadrick (Godflesh, Jesu) and features artwork by Seldon Hunt (Neurosis, Isis).

Dragged Into Sunlight commented, "The level of detail in a recording of this nature is inexplicable. Every note lobotomized, remixed and overexposed, exorcizing total aural madness. Justin Broadrick's recognition of the effort and finishing touch to its production is of course, an honour."

Watch the official album trailer below to sample the first of these new sounds. Pre-order bundles are currently available on CD or limited vinyl pressings including black (600 total), piss yellow (200 total) and transparent milk with black splatter (200 total) variants via the Prosthetic webshop here.

Dragged Into Sunlight first encountered Mories from Gnaw Their Tongues (also of De Magia Veterum, Cloak of Altering and others) back in April 2010 when Dragged Into Sunlight were about to begin a tour of Europe with Weedeater, Black Cobra and Saviours. Discussions of a collaboration began later that year, with both parties eager to see if it would be possible to make a record equally weighted in contributions despite their geographical distance. During the following years, ideas were bounced across the Channel repeatedly and rigorously until they formed a cohesive formula, one that took heavy inspiration from the intact legacy of Godflesh’s "Streetcleaner," pushing the collective sound in to a dark industrial space that both bands’ previous material had only touched upon. Progress was made incrementally, with long periods of contemplation interspersed with rapid bursts of productivity, and eventually amassing a wealth of embryonic material totalling over three hours.

Whittled down to a claustrophobic 30 minutes, N.V. was reaching its final stages, and to complete the circle of influence, Godflesh’s Justin Broadrick was invited to produce the record along with Tom Dring (who has worked on many crucial underground UK releases, including Corrupt Moral Altar and the previous works of the band). Their combined work allowed a bleak vision to be realized, and an attempt at independently producing an alternative take cemented their belief in the relentless and considered Broadrick/Dring result. Seldon Hunt was the natural choice when it came to choosing an artist to adorn N.V., his cold, ruthless style of illustration paralleling the horror of the record, as his previous work for bands like Khanate had also done. Truly then, this is a record made up of the work of a great number of talented and respected individuals, who have come together to magnify their efforts in to a blinding singularity.

Having gained notoriety for their exclusive, vicious and ritualistic live performances, Dragged Into Sunlight has established a presence throughout Europe, Japan and the US touring with heavy hitters such as Eyehategod, Weedeater, Black Cobra, Rwake, Today Is The Day, Mayhem and Soilent Green. Their cult following has set the benchmark for an ultimately unique and extreme sound, with the out-of-press Terminal Aggressor (2008), chaotic Hatred For Mankind (2009) and monolithic Widowmaker (2012) gaining them widespread critical acclaim.

Drawing the life out of everything since 2005, Gnaw Their Tongues’ mix of black metal, horror and industrial music spans 40+ releases. The group has performed at prestigious festivals in the US, Italy, Belgium and The Netherlands in addition to many shows all over the world.