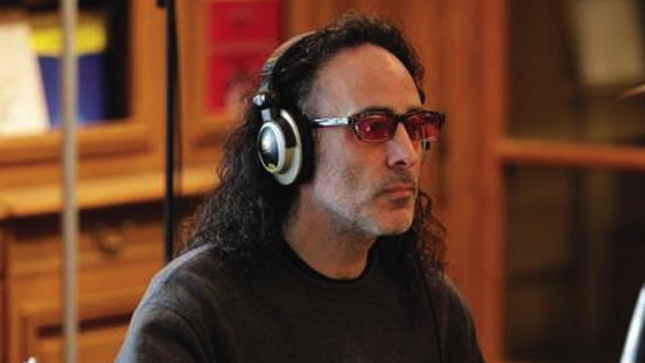 In episode 64 of The Double Stop, host Brian Sword is joined by drummer Jonathan Mover (Joe Satriani, GTR, Fuel, Saigon Kick). Mover discusses his life and career, from his training and first bands to his work with GTR, Joe Satriani, Aretha Franklin, Fuel and Matt Kramer. He also covers how he started playing with Saigon Kick and also discusses his magazine, Drumhead.

On GTR and why it ended up being a pop record (31:45) - "When we were in rehearsals and we were in the process of writing the record, it was a very progressive record. Most of the record was odd time, it had a lot of over the top playing with big epic breakdowns. It was definitely arranged in the non-pop Genesis or Yes.  But I believe Geoff (Downs - Producer) and probably Steve Hackett had it in their minds, along with the record label, that we could be the new Asia. Instead of being what we were when we began."

On working with Aretha Franklin (44:20) - "I think you're looking for Jonathan Moffett - he's the black R&B drummer that played with Madonna and the Jackson 5 and everybody. I'm Jonathan Mover - with long hair down to my ass and earrings, and I play hard rock and fusion. And he said 'No, we know who you are. We need you to fill in. Can you get up there?'"

On doing new music with Saigon Kick (1:07:00): "We did talk about it, actually. Jason, Matt and I were rapping about, you know, let's do some stuff from here. We talked about getting together and throwing some riffs around, and maybe coming up with something."

Mover posted an open letter to the Saigon Kick fans, which can be read below:

Writing an open letter to Saigon Kick fans is like writing a letter to myself, since I've been a fan from day one. actually before day one. I was hooked when Dave Feld (Atlantic Records) played me their promo before the debut CD actually came out.

I liked it so much, I made it a point to drive 4 hours to Boston to see them on their first tour back in '91, due to my being busy recording in the studio on the day that they played NYC. Post performance in Boston, I met Phil and the band and we've been friends ever since, which also led to my working with Matt (Kramer/vocals) on various musical opportunities throughout the years.

Aside from the obvious – being the songs – one of the reasons I was a fan from first listen, was that Phil played such cool drum parts. So, it's not only going to be a treat to play the tunes that I've enjoyed so much for so many years, but it's going to be a lot of fun as well.

With regard to playing the upcoming shows - having a large part of my career made up of being a freelancer (replacing/subbing/ghosting/fixing), I know what it's like to be 'the other guy.' That being said, I was not called on nor do I feel I am replacing Phil, as much as I am just going to be playing with Saigon Kick.

I'm really looking forward to it and will do my best to honor the integrity of the music, as well as Phil's parts and personality (musically speaking only, ha ha ha), all the while, throwing in a bit of 'mover' here and there.

Varone issued the following statement upon his departure:

“To all the great Saigon Kick fans, I have officially left Saigon Kick effective immediately. I would like to thank all the fans for coming out to the shows over the last couple of years, it was fun to play for you. I wish nothing but the best to Saigon Kick."

Following the news Varone had left the band, Saigon Kick bassist Chris McLernon has announced via Facebook he is following Varone's lead:

"To the New World Love Clan of Saigon Kick:

I'm leaving my post on stage right. It's been a humbling honor to see you all, and I can't ever express sufficient gratitude for your undying dedication and your love for what we've done. Take care of yourselves, travel safe, and maybe I'll see you down the road."