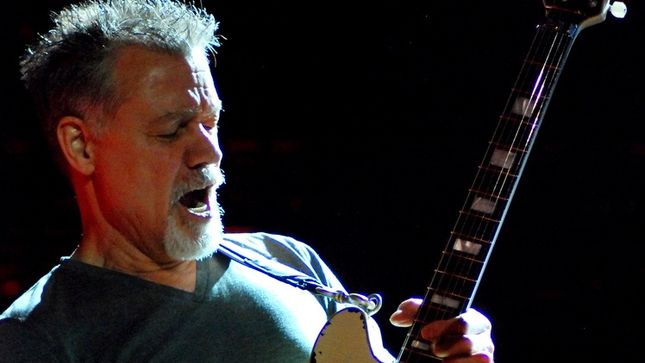 The clip below is newly uploaded fan-filmed video of Eddie Van Halen's final show, which took place on October 4th, 2015 at the Hollywood Bowl in Los Angeles, CA. This was the last show of Van Halen's 2015 summer tour. The audio is directly from the soundboard, there is no crowd noise.

Billboard is reporting that during the 2020 Billboard Music Awards on Wednesday (October 14), Kelly Clarkson took a moment to name a few of the trailblazing musicians we've lost over the last year, giving special mention to recently deceased guitar hero, Eddie Van Halen, who died on on October 6 at 65 years of age following a long cancer battle.

"A true giant was taken from us," she said of the late Van Halen guitarist. "He was a legendary guitarist, an amazing musician and an incredible songwriter."

In tribute to EVH, the 2020 BBMAs aired one of Van Halen's rare TV awards show performances, a clip from the 2015 Billboard Music Awards featuring Van Halen ripping through their No. 13 Hot 100 hit "Panama" in Las Vegas. Though David Lee Roth and Eddie Van Halen were all smiles in the joyous clip, it took on a bittersweet tone in the wake of his loss.