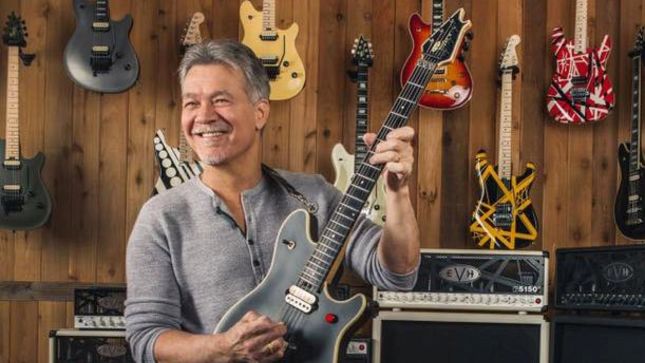 TMZ is reporting that guitar legend Eddie Van Halen has been flying between the United States and Germany to get treatment for throat cancer. This has presumably been going on for several years.

From TMZ: "He believes it's from a metal guitar pick he used more than 20 years ago. Seems Eddie would cradle the pick in his mouth, and he's been told that could well have been the source of the cancer, despite the fact he was a heavy smoker. Back in 2000, shortly after he was diagnosed, doctors removed around 1/3 of his tongue. Eddie was diagnosed nearly 20 years ago. Sources with direct knowledge tell us ... over the years there were times some of the cancer cells migrated down to his throat, and doctors would scrape them out. Our sources say Eddie has flown to Germany for 5 years to get radiation treatment, and for the most part it's worked to keep the disease in check."

Keep in mind none of the above information has been confirmed and remains a rumour at this time.

In the new video below from Guitar World, Matt Brown from EVH shows us new models based on the iconic Van Halen 5150 striped guitar. More info here.

Style and performance collide in the all-new 5150® Series Deluxe, which takes a contemporary spin on the crowd-favorite original striped model that Eddie Van Halen debuted in 1984.

Putting the stripes on hold, the 5150 Deluxe takes a stately approach in a Tobacco Sunburst or Transparent Blue Burst finish over a rippling quilt maple top.

The top-mount EVH-branded Floyd Rose locking trem keeps the 5150 in tune dive bomb after dive bomb, while the EVH D-Tuna shifts you from standard to dropped D tuning with a flick of the wrist.

The 5150 Series Standard share all the same pedigree features of its 5150 Series Deluxe brethren sans the quilt top and ebony fingerboard. Instead, the 5150 Standard comes in Matte Army Drab, Rocket Red or Satin Primer Gray finishes with a 12”-16” compound radius maple fingerboard.

The ash body with arched top sports a Natural finish that shows off the intricate wood grain, and is wrapped in black binding for a sophisticated touch. A graphite-reinforced bolt-on quartersawn maple neck holds up under the rigors of heavy riffing, while the 12”-16” compound radius ebony fingerboard with 22 jumbo frets is primed for energetic chording or blazing leads.

The Wolfgang WG Standard is a playable work of art. Its basswood body is finished in a Gold Top finish with masked-off natural body binding, a feature usually only offered on Standards with quilt tops.

Dual direct mount Wolfgang humbuckers give the Wolfgang WG Standard its signature snarl of no-nonsense overdrive and sustain or articulate, shimmering cleans. 500k pots deliver the smoothest volume swells and bring out the impeccable simmering tone in the pickups.

Dive bomb until your heart’s content without ever going out of tune thanks to the EVH-branded Floyd Rose Special double-locking tremolo.

Delivering monstrous sound and exquisite style, this Gold Top axe is also easier on the wallet at a mid-level price point.

Channel one delivers pristine cleans and compressed tone and channels two and three deliver plenty kick-you-in-the-gut overdrive and liquid distortion for blazing leads. Channels one and two each have dual concentric gain/volume controls, with shared EQ (low, mid, high), while channel 3 has an independent EQ. Other features include a rear-panel resonance control that tailors low-frequency response for all channels and a global presence control.

The cabinet of these combo amps is constructed out of birch and is wrapped in black textured vinyl with a black and gold striped control panel motif.

Last, and definitely NOT least, there’s the ’79 Bumblebee tribute model, a recreation of the iconic black-with-yellow-stripes model seen on the cover of Van Halen’s 1979 album, Van Halen II.  Limited to only 50 pieces worldwide, these reliced instruments feature all of the original specs, including an ash Strat body, bolt-on birdseye maple neck with an oiled back finish, straight 12” radius birdseye maple fingerboard with 22 jumbo frets, katalox dots and black side dots, and skirted Strat-style “Tone” volume knob.

Additionally, the guitar has been outfitted with an EVH ’79 Bumblebee humbucking bridge pickup. EVH also matched the Bumblebee’s six screw holes (hidden under the original prototype’s non-fine tuner locking tremolo bridge, which EVH recreated just for this project), along with the original prototype locking nut. All hardware has been reliced, including the custom brass string retainer, screw-eye strap hooks, side output jack and original period-correct Schaller tuning machines.