ELECTRA MUSTAINE On Dad DAVE MUSTAINE’s Influence - “I Was Very Fortunate To Have Grown Up With Him As My Father”; Video 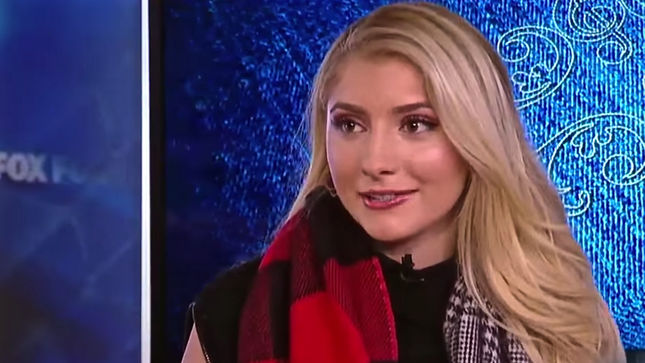 In a new interview with FOX News, country singer/songwriter Electra Mustaine, the daughter of Megadeth leader Dave Mustaine, discusses her Dad’s influence on her music and reveals any advice he gave her.

“I was very fortunate to have grown up with him as my father and in the household,” says Electra. “He's done a lot, he’s had a lot of platinum records and awards, etcetera, etcetera. But, yeah, he's offered invaluable advice about how the business works and things to look out for, things to make sure you pay attention with. Songwriting, it’s funny, because when I first came to Nashville, my first song I wrote, we wrote in an hour, and to this day, he'll tell you, 'I can't believe in country music they write songs so fast, it takes me, like, a month’, and stuff like that. So it's very different, but I have grown up with a very good counsellor."

Earlier this year, Electra released a country cover of the Megadeth song "I Thought I Knew It All”, which originally appeared on the 1994 album, Youthanasia. The official video is available below, along with the original Megadeth version.

Electra commented, saying her interpretation is for both country fans and disciples of the thrash titans: "We thought it'd be a great tribute to Megadeth fans for all the years of support. I wanted to say thank you, because honestly if it weren't for Megadeth fans, I wouldn't be able to try to fulfill my dreams now. I thought, let's show everyone this is where I come from, and yes, I am Dave Mustaine's daughter, but look what I can do with it. We tried to make it organic, raw and vocally driven."

For information and updates on Electra Mustaine go to this location.