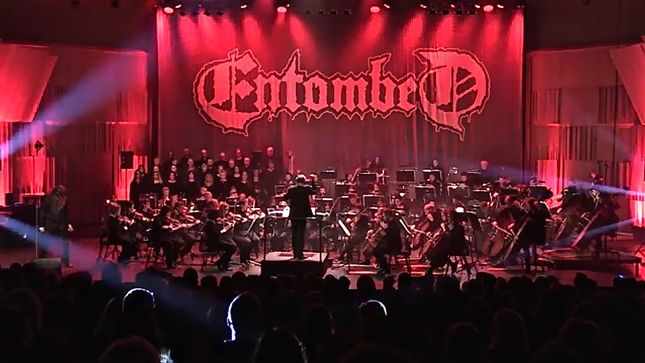 Entombed’s Clandestine is arguably one of the greatest death metal albums of all time. 25 years after the release, original members Nicke Andersson, Uffe Cederlund and Alex Hellid teamed up for a unique concert at Malmö Live in Malmö, Sweden on November 12th, 2016 where the pioneering work was played from beginning to end, from the opening “Living Dead” to closing "Through The Collonades".

In the first act the full Malmö Symphony Orchestra and a choir performed Clandestine, arranged for orchestra by Thomas Von Wachenfeldt, with the original members from Entombed sitting in as part of the ensemble and with Orvar Säfström on vocals. In the second act, the band for the very first time play the entire album live in the original version with the addition of Edvin Aftonfalk on bass guitar and Robert Andersson on lead vocals.

Clandestine / Malmö will be available on November 10th on a special edition 2CD + DVD with 5.1 HD sound in a deluxe mediabook featuring a double sided poster.