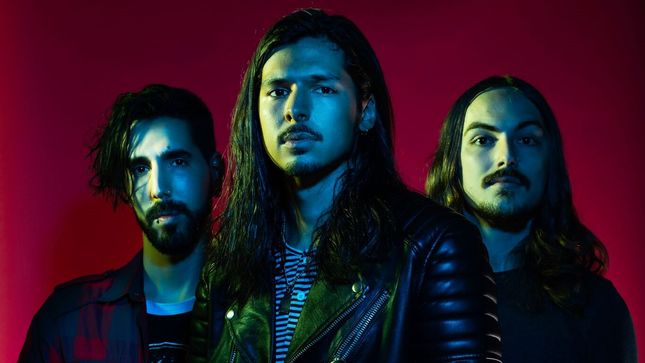 The Austin, Texas-based trio, Empty Trail - Rick Lambert (vocals/guitar), Shane Wallin (bass), and Rom Gov (drums) - has returned with a brand new single, “My World,” which perfectly showcases the band’s equally melodic and metallic sound. Produced by Rick Lambert and Kfir Gov, recorded and mixed by Kfir Gov at Evil Snail Studios in Austin, and mastered by Maor Appelbaum at Mao Appelbaum Mastering Studios in Los Angeles, CA, the song is already creating a buzz, and has made an admirer out of Ill Niño’s Cristian Machado.

“I remember when I told my producer, Kfir Gov, I wanted to record a single with him,” recalls Rick.  “He  wanted  me  to  start  writing  and  we  would  decide  together  what song  we  felt  was  the  strongest.  ‘My World’ just clicked.  It essentially just came out and I knew it was a good song.  Kfir agreed and we produced it together.  Kfir pushed me out of a lot of comfort zones, but I’m really happy with what we accomplished, especially since this song has stirred up a lot of positive attention.  I would say that everyone in this band is a pretty stellar musician, so the recording process was pretty quick.”

And it turns out the song contains a deep meaning, lyrically. “We ALL have a ‘world’ of our own that very few people know about- for some of us, no one.  It’s about having to put on a fake face and get through the day, when inside you are fighting a battle no one knows. An urge to be honest with the world.  I can’t be the only one who’s feeling this way?  No one says anything; we just ignore it.  I think that’s where true connection lies as we are much more a like then we are different.  Although everyone wants to point out our differences.”

The singer/guitarist also has a handle on his band’s sound, and what makes them unique. “I think Empty Trail’s sound takes bits and pieces of the most iconic hard rock/metal bands while maintaining authenticity. I’ve always wanted things to be relatable and believable. I don’t really want to be limited to a box. I’m sure every artist says this, but it’s  true! I think it fits the mold of catchy and even pop-y at times, which seems to be what’s going around, but it comes from a real place. I’m in music because this keeps  me going. I have something I need to say, something that I need to let out, because if I bottle it up it is destructive. Yes, it’s rock, and it’s exciting and I want everyone to have a great time, but if you are listening, I hope it makes you feel understood. Somewhere where you can be free and not judged for who you are.”

As is the case with many modern day rock bands, Empty Trail plans on issuing a steady stream of singles - rather than an album’s worth of tunes. “I’d like to just focus on singles. As much as a full-length would be cool, I don’t see how it makes sense for how the market is. I’d rather spend time on specific songs then an album that only a few people will have the patience to listen through. Sad but true.” Hopefully, the buzz surrounding Empty Trail will soon lead to a full-on tour. “I would love to tour when it makes sense to. I want to connect with people who get this in any fashion. Maybe this is my personality, but I want to go where we are wanted!”

And lastly, where can fans connect and correspond with the band?  “We are almost everywhere you would imagine.  The most activity tends to be on Instagram, until a new platform comes around and knocks that one out. Connect with us there!