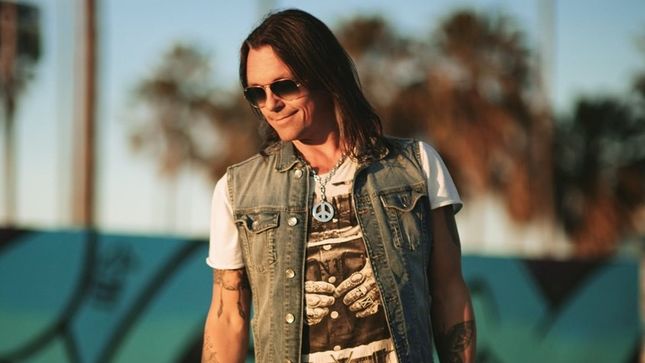 Andersen on the video:

"This is my celebration of the mid ‘80s to the max! Miami Vice, Axel F, Top Gun and so on... It's time to put pink gel in the hair and tighten those hightops. Featuring Ida Nielsen on bass (Prince) and Marcus Linnet on electric Simmons drums. I invited Marcus to lay down some drum fills on the track because of his work with Anne Linnet & Marquis De Sade. The story goes that Anne imported the first set of Simmons drums to Denmark back in the early ‘80s, and yes: We used the original pads and drum machine for the recordings of Skybar. Ida and I have a long history of different work over the last 10 years, so it was obvious to invite her on board for this song, and she said yes! Ida took this track to next level and I decided to name the song after her. We did a show together 2 years ago on a rooftop bar in Los Angeles, so in my love and respect for her, I named the track: ‘Skybar’!"

You might know Soren Andersen for his 10 year long relationship as the guitarist for Glenn Hughes (ex-Deep Purple), but the 45 year old Dane is much more.

Producer, co-owner of famed Medley Studios in Copenhagen, ambassador for world class equipment like TC Electronic, Yamaha Guitars and Line 6 and of course playing the six strings with a bunch of other great musicians.