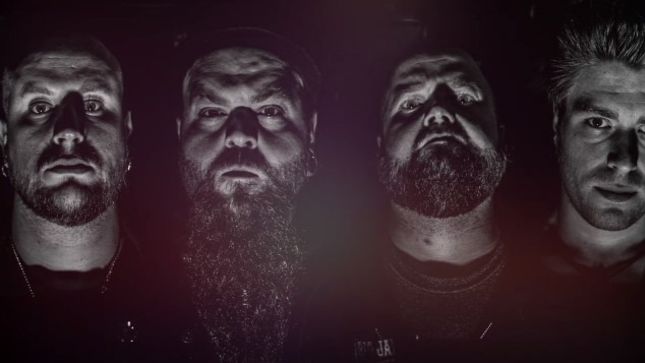 Canada’s Exes For Eyes, the musical vision of Dave Sheldon (ex-Man With Target, Annihilator) and the lyrical conception of vocalist and frontman Big James (Stab.Twist.Pull, Endast, Authors) have left their hiatus to bring you a new album Of Strength and Sorrow to follow their 2014 album, Tongues Like Figure Eights.

Back in 2014, the band challenged their fans and the metal community with The Platinum Project to help a fully independent band reach platinum status by selling one million digital copies at only $1. Did the band reach their goal...? Not quite, but they did sell over 16,000 digital copies and encourage an online trend that followed. The promotion was a great experience and brought Exes For Eyes tons of exposure and attention from the music industry.

Fast-forwarding to 2019, with their next album Of Strength and Sorrow, out as of Tuesday, August 13th, the band is entering the moshpit with a new challenge dubbed The Aluminum Project. It's the same concept, selling their new album exclusively for only $1 except with some more twists, which the band goes into further detail in the following video they have put together explaining the concept.

Watch the explanation of #TheAluminumProject below.

Of Strength and Sorrow is available for only $1 exclusively at ExesForEyes.com.

“Hold On” is the first single off this album and is an excellent introduction to the release that can simply be defined as "heavy as fuck".

Having taken the last four years since their previous album, Exes For Eyes have shown that they have matured sonically, completing an album that is darker without abandoning the soundscapes their fans have grown to love with their massive groove. Taking inspiration from composers such as John Williams, Danny Elfman, John Carpenter and Hans Zimmer they are new instrumental layers that add a definitive depth to the album. Exes For Eyes comments on the writing process behind the massive 65-minute album:

“The writing process took so much out of us this album, so the idea of not releasing a song because 'it doesn’t sound like the other ones' didn’t even cross our minds. I feel like we knew we were going to release it ourselves on our terms again, so the idea of a 65-minute album didn’t seem outrageous.  You’ll have your favourites the same way we have ours, but these are the songs and we want you to hear all of them. We meant every note and every word.”

Metal fans, especially those who follow Slipknot, Soilwork and Periphery can experience utter brutality and sheer beauty in lyrics that stem from a personal place coupled with heavy riffs and ferocious drumming found in the single “Hold On”.

The album download for Of Strength and Sorrow will be available for only $1 EXCLUSIVELY as of August 13th, 2019, at ExesForEyes.com.

“Build, Work, Dream, Create”
“Memories That Last”
“The Metal”
“Nothing Ever Satisfies”
“The Fire Inside My Head” (feat. Trey Xavier of In Virtue)
“Set It All On Fire”
“The Savage Self”
“I Miss My Friends (Too Many Of Them Are Dead)”
“Hold On”
“True Self Reckoning”
“Love” (feat. Pepe Poliquin of BornBroken)
“Get The Fuck Out Of My Head”
“Methuselah”