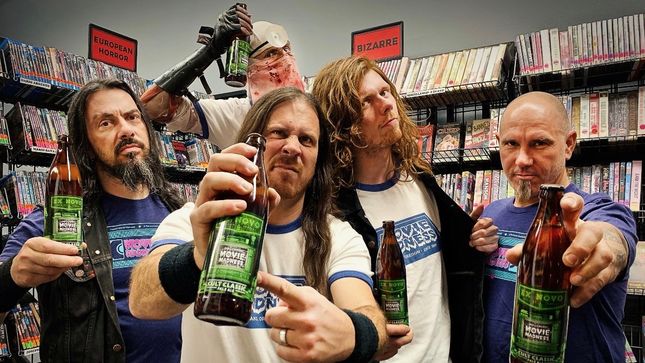 21 years since their murderous debut, Exhumed continue their onslaught of gore-obsessed death metal on their new brand new album, Horror, coming October 4. The band have released a music video for the track "Naked, Screaming, And Covered In Blood". Watch the SoCal Cinema directed NSFW (nudity, blood) video below.

Frontman Matt Harvey comments: “We’re excited to share this video nasty with all you creeps and mutants. There’s a NSFW version [the one below] that hews closely to the title, and then a tamer version that won’t upset the bloated corporate entities that have insidiously slithered their way into our music-consuming activities. Director Dustin Ferguson really captured the vibe of the record - it’s schlock-and-shock bloody mayhem, and unlike our last vid, even features the vidiots in the band! It’s really got it all: Blood! Boobs! Chainsaws! Did I mention boobs? And a special guest host VJ appearance to cap it off. Face it true believers - you’ve hit the Gore Metal jackpot!”

Horror is due out October 4th on CD/deluxe LP/LP/digital. Physical packages are available for pre-order via Relapse.com here. Digital downloads / streaming services are available here.

Aptly titled, Horror is an exploration of all things macabre, as the undisputed pioneers of neck-breaking riffs plow through 15 of the band’s most intense tracks to date. Nightmares meet shred, as the speed-inducing track “Ravenous Cadavers” highlight Exhumed’s penchant for blazing, face melting guitar work, while “Naked, Screaming And Covered In Blood” and “Playing With Fear” elevate Exhumed to levels of grind unheard of since Gore Metal.

Horror was recorded at Exhumed’s home-built studio Darker Corners, a first in the band’s career. Horror was produced by Exhumed and Alejandro Corredor (Brujeria, Nausea) and was mixed and mastered by Joel Grind (Toxic Holocaust).

The Relapse.com exclusive Horror Deluxe VCR “Slaughter Video” Rental Store Pack is strictly limited to 100 and includes the Horror LP pressed on blood red and white merge with aqua blue, blood red and oxblood splatter, a playable VHS in custom slipcase with audio and visuals of the entire album, a retro VHS inspired sticker sheet, plus an authorized Slaughter Video membership laminated card as well as an official Slaughter Video employee t shirt. All items are exclusive to this package and are housed in a meticulously designed VCR inspired boxset.

Exhumed and Sonoran death metal legion Gatecreeper (pictured below) have announced a co-headlining North American tour through the fall.

The tour begins on October 31 in Austin, TX and ends December 4 in Las Vegas, NV. Additional support by Necrot & Judiciary. All confirmed tour dates are available below.

Comments Exhumed’s Matt Harvey: “We couldn't be more stoked to bring folks such a stacked lineup for this tour. It's gonna be a neck-breaking extravaganza of massive proportions! We can't wait to get out and play stuff from Horror for all the Gore Metal Maniacs out there and showcasing the tunes alongside Gatecreeper, our Bay Area homies in Necrot and Judiciary will really be a trial by fire for the songs. We've got a new setlist, new production, and the same old body odor, so come out and make some noise with us!"