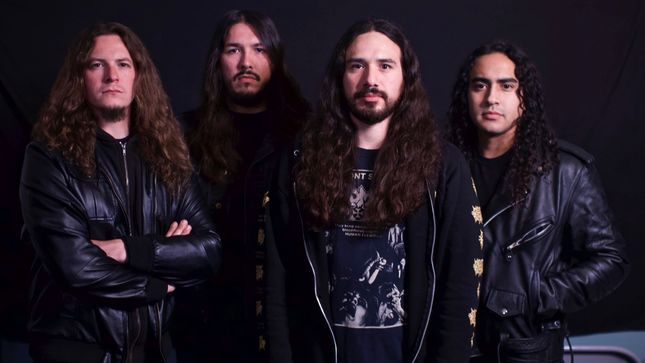 In honor of Friday the 13th, the death/thrash/shred quartet Exmortus have unveiled an animated music video for their “Evil Dead”-inspired song “Swallow Your Soul,” one of two new original tracks on their forthcoming Halloween/horror-themed EP, Legions Of The Undead. The clip, which was designed by Wayne Joyner (Dream Theater, Devin Townsend), can be seen below.

Legions Of The Undead is out on October 25th via the band's own Exmortus Music, in cooperation with M-Theory Audio.

The five-track release - which was recorded earlier this year with longtime producer Zack Ohren (Machine Head, Warbringer, Immolation) at Oakland's Sharkbite Studios - features a Halloween/horror theme and two new original songs (the title track and “Swallow Your Soul”, the latter of which will premiere on September 13).

The cover artwork, designed by Toha “AHOT” Mashudi, can be seen below.

A brief trailer for Legions Of The Undead can be seen here.

Legions Of The Undead marks the first Exmortus release featuring the lineup - founding guitarist/vocalist Jadran “Conan” Gonzalez, guitarist Chase Becker (also of Warbringer), bassist Cody Nunez and drummer Adrian Aguilar - that has logged numerous miles on the road together over the past two years with the likes of Obituary, Venom Inc., Sabaton, Kreator, Allegaeon, Hatchet, Homewrecker and The Absence. The group - whose most recent performance was alongside Exodus at the legendary thrash group's sold-out “Bonded By Con” concert during San Diego's recent Comic-Con - will support another iconic Bay Area act this fall, when they team up with Death Angel for a five-week tour across the US and Canada. See below for the complete itinerary.

"We are beyond excited to support Death Angel across North America this November and December,” says Gonzalez. “They've been nothing but great to us whenever we've played in their neck of the woods and now it's a great honor to be a part of their tour. Can't wait to play new tunes from our new EP. See you on the road, Legions!"