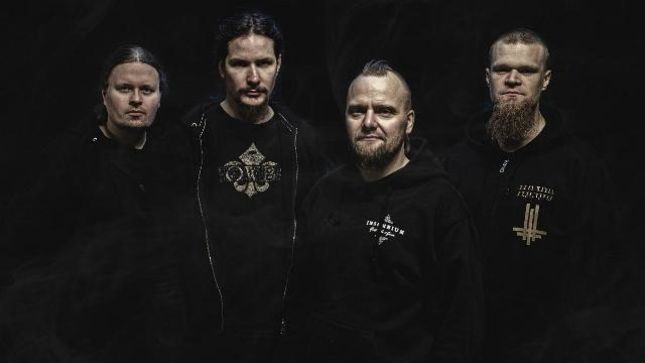 Finnish death metal band Deathing released their debut EP, All Hail The Decay, on May 22nd via Inverse Records. To celebrate the release they also made a new video for track "Dead World Alive".  Check it out below.

Vocalist/guitarist Marko Mäkinen comments: "The buzz surrounding the EP has been hugely positive and we have been conveying the energy from it to producing new and even more awesome riffs for future material. Huge thanks goes to our mixing wizard Olli Paajanen, who worked amazing tones to support our songs! 'Dead World Alive' is lyrically from Mikko's pen and it is heavily influenced by Hugh Howey's Silo book trilogy. The song is a story of dystopic society in isolation, where the new generation starts to question the official truths from the ones in charge."

Spring 2014: The building blocks of Deathing were taken from the ruins of band Ruindom when former bass player Marko Mäkinen dug up his guitar and started bombarding drummer Mikko Kivimäki with riff ideas. He took the bait. Rami Vartiainen soon joined the fold to fill up the bass frequencies and Mika Lehtinen took up the second guitar.

Fast forward to 2019. The spark finally ignites the full flames when recording the drums for the debut EP release as the material showed great promise. After Lehtinen departs due to lack of time, good friend Aleksi Tossavainen takes up the seven string duties and Deathing is complete in its current form.

"We have never intended to reinvent the wheel of death metal or to please everyone. We create our music with our own terms because we love it that way and we really think we can reach same-minded people with our debut release. A lot of our influences are from 80’s and 90’s, but we like to be mobile and not get fortified in one place or decade."

For information and updates on Deathing check out their official Facebook page here.