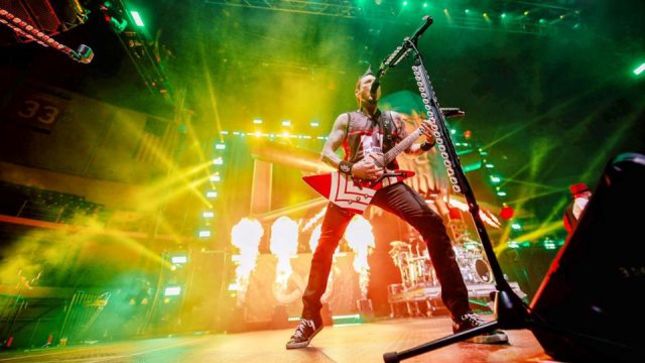 Five Finger Death Punch have checked in with an update announcing their current tour has come to an unexpected halt for medical reasons:

"Last night, Jason Hook was taken to the emergency room where it was determined his gallbladder needed to be removed. Jason underwent surgery successfully but will have to remain in the hospital until his doctors determine he is fit to be discharged and travel home.

Jason's healing is our #1 priority. As a result, the last three shows of this current tour will be postponed, however, we are working on coming back to play Duluth, Omaha and Des Moines very soon. Once we have an update on new dates to return, we will post the information on our website and social media channels. Please hold on to your tickets in the meantime.

Jason very much appreciates all the well wishes and, rest assured, we will see you back out on the road very soon!"

Five Finger Death Punch have amassed over 3 billion streams to date, over 2 billion video views and are the 3rd biggest artist in the hard rock space measured by total consumption (sales and streams) - surpassed only by Metallica and AC/DC. Newly signed to Better Noise Music, they’ve garnered 22 top 10, hit singles over the last few years.

Today, Five Finger Death Punch also premiered the debut single from F8, “Inside Out” one of the most personal songs that the band has released to date. Watch the official lyric video below. Fans who pre-order the album digitally will receive an instant download of “Inside Out” along with two other new tracks before the release on February 28th. The album will be available in the following formats: CD, digital download, mastered for iTunes download, double gatefold vinyl and picture disc vinyl. The band also curated special F8 merchandise bundles of albums with exclusive t-shirts, hoodies and more available for pre-order now as well.

Says Five Finger Death Punch guitarist Zoltan Bathory: "We had an extremely successful, yet tumultuous couple of years as a band. We didn't just weather the storm but came out on the other side better than ever. It was a focused sober group recording, our most important album to date and without a question it shows.

This album represents rebirth, progression, transcendence both personally and musically." Vocalist Ivan Moody adds, “This record to me is ‘absolution’ - everything I’ve done in my life has led up to this moment."

"Inside Out" lyric video:

Five Finger Death Punch also announced today that they will kick off the second leg of their current US arena headline tour in April 2020, featuring special guests Papa Roach, I Prevail, as well as highly acclaimed newcomer Ice Nine Kills. The tour is co-produced by  Frank Productions and Live Nation. See all dates below.

Five Finger Death Punch are currently touring US arenas before heading to Europe right after the holidays for their nearly sold out arena run with very special guests Megadeth and global breakout rock sensation Bad Wolves. Information on all tour dates including links to tickets and VIP packages can be found here.