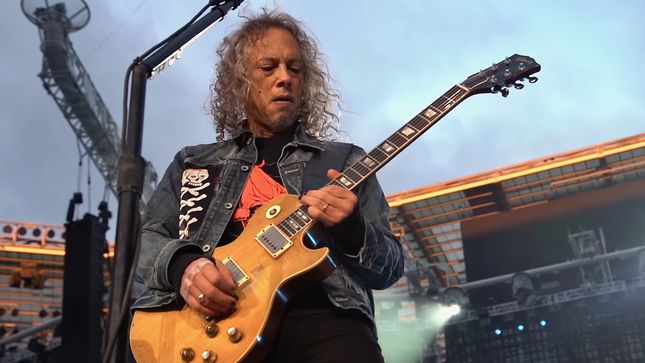 Rufus Publications has issued the following statement to Planet Rock:

"Fleetwood Mac guitarist Peter Green, now 73, is a reclusive music legend, now living in retirement in the south of England. He spends most of his days playing guitar or drawing at home, creating a body of artwork over the last few years.

"Recently, he has been working with Rufus Publications on a special book and music project, scheduled for release later this year. As a result of the project, Metallica guitarist Kirk Hammett, who owns Peter’s classic 1959 Gibson Les Paul, has been contributing, first by going into Abbey Road and recording something very special with said guitar - known as “Greeny” - and then by visiting Peter at his home and reuniting him with the guitar for the first time since Peter sold it to Gary Moore, 47 years ago. It was an astonishing meeting of two great, but very different, musicians who spent much of the afternoon discussing the guitar and the music that inspires them. Kirk played Peter the guitar track recorded at Abbey Road and the day ended with Kirk telling Peter he would be sending him a full set of Metallica recordings to listen to.

"The project Peter is working on with Rufus Publications and is nearing completion and will be released later this year and will include several guest musicians playing on some unique recordings."

Hammett shared two photos on social media of himself with Peter Green. The first of the photos, taken by Ross Halfin, depicts the two guitar icons sitting on a sofa, with Peter Green clutching a signed vinyl copy of Metallica’s 1986 album, Master Of Puppets. The second  photo is of them smiling while clutching Peter’s fabled 1959 Gibson Les Paul guitar, known as Greeny, which Peter sold to the late-great Gary Moore and Kirk now owns.

See the shots below, read more and see more photos at PlanetRock.com.