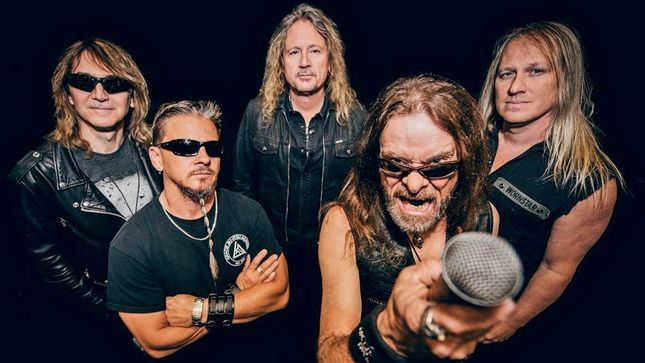 Flotsam And Jetsam guitarist Michael Gilbert is featured in a new interview with Heavy New York discussing the band's latest album, The End Of Chaos. It was conducted on May 22nnd at the Gramercy Theatre in New York City.

On The End Of Chaos

Gilbert: "It's a stepping stone from the last record into this one. The next one... we're already working on, it's going to be another level again. The End Of Chaos has added us to a new genre of metal, which is power metal, which we've never been a part of before. We're getting those fans coming through, especially in Europe and stuff like that. We're hearing from the Vikings (laughs)."

On the band's power metal fans

Gilbert: "I think The End Of Chaos is really helping that out. We're not just a thrash band anymore. Maybe in our early days you could do that, you could say that, but not now."

On songwriting for The End Of Chaos

Gilbert: "I was one of the main songwriters when I joined back in '85. It's still been the same as far, like, how I come up with a riff and put it on tape. Before, I used to put it on a cassette tape and multi-track with that, which was insane. It takes forever to do that. Now, you just turn on your Pro Tools and play the riff and drag some drums over to it and you have an idea."

Gilbert recently uploaded GoPro footage of the band on the road during Killfest 2019, also featuring Overkill, Destruction and Chronosphere.

Gilbert states: “Everyone who knows me knows I have a GoPro in my pocket at all times. I try to capture everything I can on the Flotsam tours and no one is safe from ending up some sort of footage. LOL! These are some fun times on Flotsam And Jetsam’s European tour with Overkill, Destruction and Chronosphere. Fun times with some old friends and new friends….\m/“

Flotsam And Jetsam are supporting, The End Of Chaos, the band's fourteenth album in their more than 30-year history. Find the band's live itinerary here.