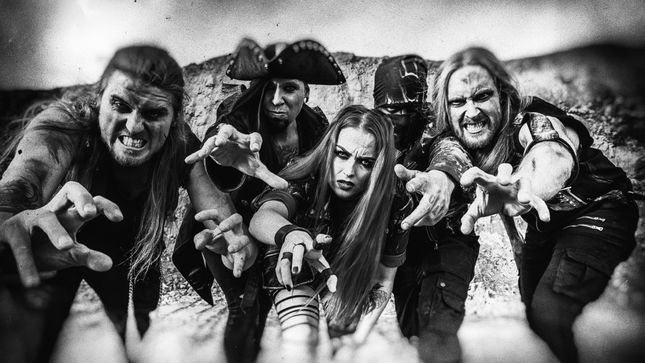 Falun - this magical city in the heart of Sweden, surrounded by idyllic forests and deep blue lakes, emerges more and more as a creative center for ambitious and talented young bands. Is it in the water? Is it in the air? No one knows, but it remains a fact that Falun is the glorious birthplace of some of the most promising and hottest acts on this planet. After spawning bands like Sabaton, Twilight Force, Civil War and Billion Dollar Babies, Falun now has a new up-and-coming crew in stock. Forget everything you thought you knew, because Follow The Cipher are ready to herald in a new musical era and crash through the many dimensions of our universe to steal your breath. Despite their stylistic diversity, the Swedish metal act creates a very cohesive ambience, mixing a first class sound with magical charisma, an innovative concept, live presence and an incredibly talented singer.

Let's take a little look into the past: Follow The Cipher‘s story started in May 2014, when Ken Kängström decided to start a band with the intention to be different from everything else in the music scene. The idea itself had been haunting his mind for years, but the catalyst to finally put his thoughts into action was the result of a longtime collaboration with the internationally acclaimed metal giants Sabaton, with whom Follow The Cipher maintain a close friendship.

Ken Kängström is definitely not a newcomer in the Scandinavian music scene, since he co-wrote and co-produced some well-known Sabaton songs with Joakim Brodén, such as the monumental anthem Carolus Rex. It was this track which got the ball rolling for Ken: "I think the song sparked the first inspiration in me - in particular, it was responsible for me starting to trust my own abilities and judgment," Ken reflects. "When me and Joakim wrote this track, I felt deep inside that it was time to put my plans with Follow The Cipher into action." Therefore, the band has also included a version of this important track, Carolus Rex, on their debut album.

Something unique was born, growing to become a mixture between Nightwish, In Flames and Sabaton, yet creating something completely different and innovative. "I consider our music as both visual and cinematic," says Ken. "The sound is large-scaled and multi-layered - each element plays an important role within the overall concept. You can listen to our music in two different ways; either by focusing on the individual, versatile elements like the keyboard melodies or Linda's powerful voice, or you can indulge in the whole package. Both type of listeners will get what they look for in our very own CIPHER METAL!“

The Cipher crew consists of five talented members; Linda Toni Grahn, a fantastic and highly talented singer, with long pinkish red hair and emerald eyes, equipped not only with a powerful and characteristic voice, but also outstanding charisma. When taking to the stage, all it takes are a few seconds for Linda to capture everyone‘s attention. "Linda is unique - she stands out from the crowd, not only as a great singer, but also as a charismatic personality! Immediately after meeting her, I knew she would be the right person for us!” Ken Kängström (guitar) recalls the first meeting with their female captain of the Cipher workforce. Other crew members include Karl Löfgren (drums), Viktor Carlsson (guitar) and Jonas Asplind (bass). 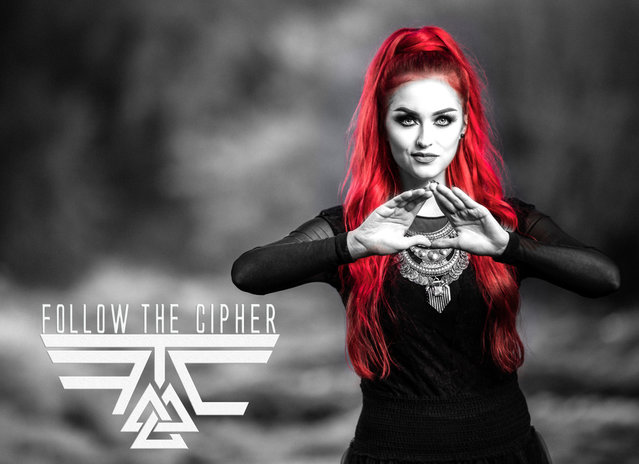 Follow The Cipher is an ambitious troop, not only do they express their passion through their music, but also through their extravagant outfits and impressive live shows.

Therefore it didn‘t come as surprise, that the world‘s biggest metal label, Nuclear Blast, signed them after experiencing the band live at Sabaton Open Air 2017. "We had them on our radar for the past two years, were convinced of the song quality and appreciated the commitment of the members. Eventually, the determining factor was their outstanding live performance, which proved to us that Follow The Cipher have everything they need," states Markus Wosgien, A&R of the German metal label. The band adds: "We are super excited to be apart of the biggest independent metal label in the world. This collaboration will shock the heavy metal ground, and is for sure a dream coming true for all of us."

To cut a long story short, the Cipher crew is more than ready to take you on an exciting journey through the darkest galaxies of metal. It's time to open a new chapter of heavy metal history - it's time to Follow The Cipher!

Check out a lyric video for "The Rising" below: