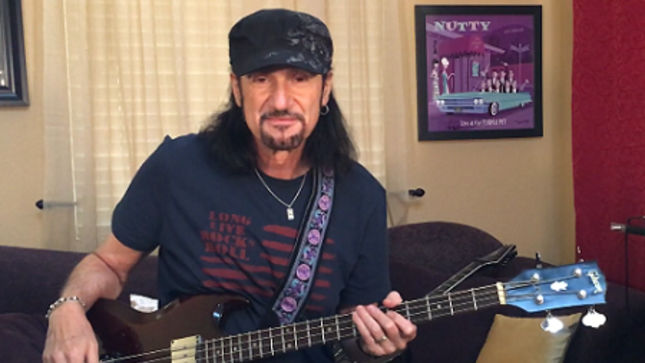 "Many of you might know I have played bass on some KISS songs," begins former KISS guitarist Bruce Kulick, who was in the band from 1984 to 1996.

"For Carnival Of Souls, two songs of the four that I played the bass, 'It Never Goes Away' and 'I Will Be There' feature this Gibson EB-3. (The other two songs I played bass on for COS was 'Jungle' and 'Rain'). I was influenced by Jack Bruce of Cream and always loved the short scale, fun feel of these Gibson Bass instruments. It’s a darker cherry almost wine finish, typical of this year, and it has chrome parts, and a unusual pickup selector. Witch Hat knobs, and a thumb rest, and very much looking like a SG Guitar. The bridge even featured a mute! The Bass pickup is super low end tone, but the magic is really in the mini humbucker. For a Bass to have a pickup hot like that, well listen to the unique tone in my video, as I play along with 'I Will Be There'. Ironically when I was young, it was my first electric instrument. So to say EB-3 basses are important to me, the answer is hell yeah! Another instrument with KISSTORY."

KISS released Carnival Of Souls in 1997. The album peaked at #27 on the Billboard charts.