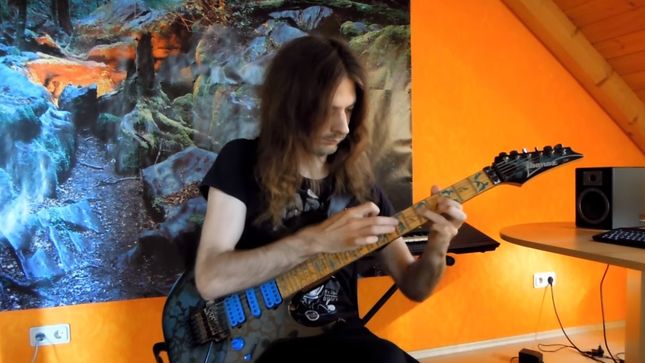 Path Of The Hero is the third all instrumental solo album by guitarist Christian Muenzner (Eternity’s End, Alkaloid, ex-Obscura, ex-Necrophagist), following the 2014 album Beyond The Wall Of Sleep. The album features Eternity’s End bandmates Jimmy Pitts (keyboards) and Hannes Grossmann (drums; Alkaloid, ex-Obscura, ex-Necrophagist ), as well as bassists Jerry Twyford and Linus Klausenitzer (Alkaloid, Obscura). With nine tracks and a total playing time of only 35 minutes, this is the shortest of Muenzner’s three solo albums so far, purposely done to keep in the tradition of the late ‘80s Shrapnel Records albums. The album was co-produced and mixed and mastered by Hannes Grossmann.

Muenzner states: “This entire album happened very spontaneously. I had originally not intended to make another instrumental guitar album any time soon, but inspiration hit me and the ideas came to me very fast, and I wrote and recorded the album within a couple of months. I think among my three solo albums this is my most compact and focused work and definitely contains my best playing so far. I feel I have improved a lot with my technique, phrasing and melodic sensitivity since my last solo effort 5 years ago.”

The influences on the album range from neoclassical and heavy fusion to power and progressive metal. The song "Discovery" was co-written by Hannes Grossmann and contains a section that was originally intended for an Obscura song when Muenzner and Grossmann were still in the band. "Nocturne" is an arrangement based on Franz Liszt’s "Liebestraum No. 3".

The album will be released in Japan and South Korea through King Records on March 11 and the rest of the world on March 20 through Muenzner’s own label, Shredquarter Records.