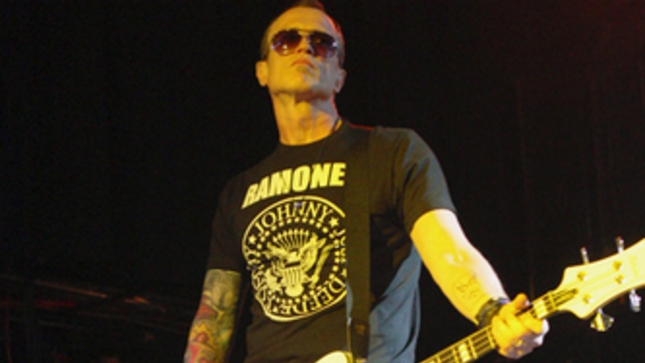 In episode #72 of The Double Stop, Brian is joined by bassist Chris McLernon (Saigon Kick, Cold Sweat, Cold Gin). This is Part 1 of a two part episode.

McLernon discusses his life and career, from his early days/bands to the formation of Cold Sweat (originally called Ferrari) with Marc Ferrari and Oni Logan - and having Oni leave the band to join Lynch Mob, finding a replacement singer in Roy Cathey, the unexpected success of his KISS tribute band Cold Gin (with future KISS guitarist Tommy Thayer), and how he got the gig in Saigon Kick following the recording of The Lizard.

On Lynch's pitch to Oni Logan to join Lynch Mob (21:54): "At this point we're called Ferrari. He's standing there and he says 'Hey Oni! How'd you like to drive a Ferrari instead of just being one?' And I'm like - OK, that's pretty clever. Way to go."

On Oni quitting Cold Sweat on the day they were to sign a record deal (24:00): "Everything I had worked for was on a stack of paper, right in front of me with a pen. And I'm just thinking to myself, you're kidding me."

On Cold Sweat getting dropped after their first album (with new singer Roy Cathey): "Wendy (Dio - Manager) calls us up one day and says I've got good news and bad news. The good news is MTV added the video to heavy rotation today. The band news is MCA has dropped the band."

"To the New World Love Clan of Saigon Kick, I'm leaving my post on stage right. It's been a humbling honor to see you all, and I can't ever express sufficient gratitude for your undying dedication and your love for what we've done. Take care of yourselves, travel safe, and maybe I'll see you down the road."

For more on Chris McLernon go to this location.