GENE SIMMONS Gives Wannabe Rock Star A Reality Check On New Episode Of Dr. Phil - "Get A Damn Job And Pay Back Everybody All Their Money" 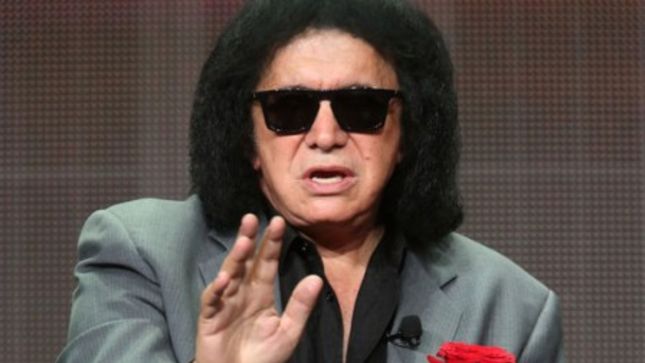 KISS bassist/co-founder Gene Simmons recently guested on an episode of Dr. Phil, giving 43-year-old wannabe rocker Kris a reality check with regards to pursuing his dream versus his responsibilities. Following is the press release for the episode:

When is the price of fame too high?

For 43-year-old wannabe rocker Kris, who has been chasing his dream of being a rock and roll superstar his entire life, there is no price he says he wouldn’t pay to be famous.

“I’m addicted to fame. I’m addicted to wanting to be somebody. My addiction is a drug. That feeling you get when you perform, the adulation, it’s like no other,” Kris explains on Friday’s Dr. Phil.

Now, after conning family and friends out of more than an estimated $1.7 million to pay for music equipment, instruments, cars, clothes and more, Kris says he’s on the verge of losing everything and turns to Dr. Phil for advice.

“I’ve sacrificed everything. My rock career hasn’t worked out the way I thought it would. Maybe it’s not meant to be,” Kris admits.

Dr. Phil surprises Kris – who says he’s just weeks away from being kicked out of his parents’ house and being homeless – with his rock and roll hero Gene Simmons of KISS who, along with Dr. Phil, Kris’ parents and his ex-fiancee, serves up some tough love for the would-be entertainer.

“I’m here to tell you that being delusional about yourself and [thinking], ‘I have this dream and I’m God’s gift,’ that’s great. And I support you and I hope you do become the next Elvis,” Gene tells Kris. “But get a damn job and pay back everybody all their money.”

"Last week, one of our patients, Dilan Kohn got his final wish," reads an online note from Children's Hospital of Nevada.

"The critically ill 17-year old desperately wanted to meet and hang out with the infamous Gene Simmons from the band KISS. Mr. Simmons had not only been Dilan's idol, but also his inspiration growing up. A big UMC thanks to the PICU Nursing staff along with the Child Life Specialist, Sarah Castiel, in making this wish possible. Mr. Simmons was sent an email request last Thursday afternoon and flew into Vegas the next morning. He showed up with a big bag full of signed memorabilia just for Dilan. The two hung out, shared stories and laughed together for well over an hour while staff looked on with tears in their eyes. Thank you Mr. Simmons for making this wish come true just in time. Unfortunately Dilan passed away peacefully a couple days later."

Pictures of Gene Simmons and Dilan Kohn together in the hospital can be seen at this location.