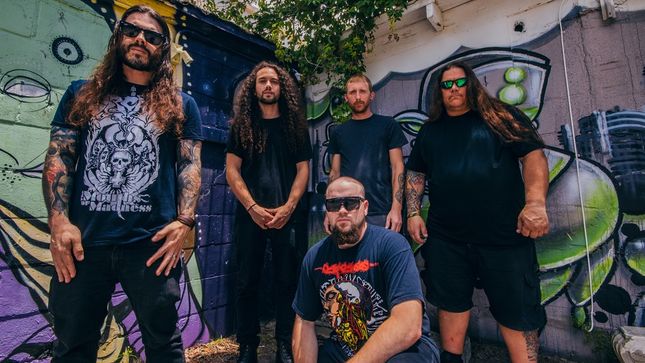 Thrash/death metal band Generichrist, along with Spanish record label Metal Bastard Enterprises, have announced the official release date for Insomniac Death Parade, the band's new full-length studio album. It will be released on 12" splatter red vinyl on November 29 in Europe and on December 13 in the U.S.

The band's front man, Tony Anderson shared some insight on the release, "The new album is done and being pressed as we speak. It's our first full-length studio album since 2015, so we are beyond excited to get this out. The album has 12 tracks and was recorded in Tampa Bay at the Red Room Studios with Mark Prator. The album cover art was done by underground metal artist, Ipoet Poetra. Ipoet also created the cover art for the Rotting In The Swamp EP, so we wanted to tap into his skills again on this one. Fans will recognize a familiar voice on the new album as the one and only horror icon, Bill Moseley lends his talents to the album. Bill has appeared on a few of our past records and we're always excited to have him back. There's also some guest guitar work by the shredder Matt Cuthbertson from the Saskatchewan thrash metal band Untimely Demise. We are really proud of this record and we're looking forward to its release.”

Head to the band’s Facebook page for preorder information.