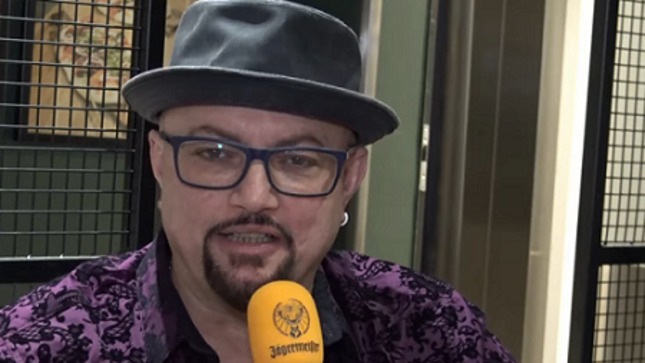 Geoff Tate, who was the lead vocalist for Queensrÿche from 1981 to 2012, recently spoke with Finland's Kaaos TV. During the interview, which can be seen below, Tate discusses the 30th anniversary of Empire (released in August 1990), as well as playing the album through entirely in his solo live shows.

An excerpt has been transcribed as follows:

Geoff Tate: "Empire was, of course, a milestone album because it had such vast commercial success. It sold six or seven million albums. It was a wonderful experience to make that record, and to still be touring on it years later, it's an honour."

""Honestly, it didn't feel any different than any other album we'd made at the time," continues Tate. "We always called our albums experiments, because you never know what's going to happen when you get everybody contributing to the album or certain groups of people together, like the production team that you hire to help you make it. You don't know what's going to happen or what you're going to come up with. Hopefully, you strive for some sort of level of professionality and quality, but you never really know."

"When something connects with people, like Empire did for example, you start asking questions like, 'Why did this connect [more] than other albums we've done, which are equally as interesting?' The only reason I can really come up with is, well we had an amazing record company at the time. EMI International was a gigantic international conglomerate with millions and millions of promotional dollars to put behind their records. I remember the promotional budget for Empire was $6 million, which is just unbelievable. I think the last record I issued on a record company, the promotional budget was, like, 1,000 Euros... If you have enough promotional dollars to put at something, then you have a much better chance of reaching more people with what it is you're doing — and if it's a catchy song that catches on with people, it's a snowball kind of effect."

The Queensrÿche albums following Empire never achieved the same degree of success, a fact Tate elaborates upon. "I think it's probably due to consistency. If you look at bands like Iron Maiden, they don't really change much. They really make a similar-sounding record each time. Queensrÿche was very diverse, and it's hard to market something that's completely changing all the time. I think that probably contributed to it. I have no complaints — I'm very comfortable in life, and I'm happy with my choices. Looking back on it, if we were perhaps more consistent with our records, came out with a new record every year, and it was pretty much the same kind of record each time, I think we would have gone a different route. Our records were very diverse and different, and there were always experimentations. In a lot of people's minds, you listen to an album like Operation: Mindcrime for example, and you get really into it, and then you hear an album like Promised Land, and you go, 'Wait a minute — is this the same band? I don't know? This is something really different.' A lot of people have told me that when Promised Land came out, they didn't get it. They didn't understand it because it was about things that they were a few years from experiencing yet, so we were kind of ahead of our audience in a lot of ways."